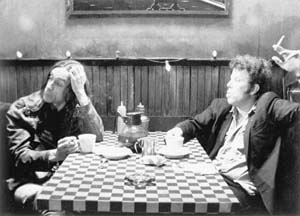 Jarmusch’s latest is a movie about resonance. This theme (plus a few others) wafts through the picture like a recurring jazz riff. But, like the indolent pleasures of sitting around and enjoying a cup of java and a cig, Coffee and Cigarettes is an idle pleasure that evaporates in plumes of steam and smoke. With his track record over the years as the independent film world’s most stalwart adherent who has a lifetime of unique and inspired films to his credit, Jarmusch has earned the right to be taken seriously with every new release. His films are craved by many film fans the way one might crave, um, coffee and a smoke. And though Coffee and Cigarettes is frequently delightful and engaging, it is an uneven and frustratingly ununified work. The process of the film’s making, no doubt, has much to do with its erratic coherence. Coffee and Cigarettes is a collection of 11 vignettes of people (usually two people) sitting around talking, while smoking cigarettes and drinking coffee (and, in a few instances, tea). Begun in 1986 as a short film for Saturday Night Live, Jarmusch filmed the subsequent episodes on his own over the next 17 years. Even though about half the segments were filmed only recently, the whole endeavor has a real downtime feel to it, as though it were something to which Jarmusch returned when in between projects. Four top cinematographers – Frederick Elmes, Ellen Kuras, Robby Müller, Tom DiCillo – worked on various segments, whose unifying visual motif is the checkerboard pattern that appears in each vignette. The cast is a who’s who of Jarmusch’s hipster friends: Roberto Benigni, Steve Buscemi, Iggy Pop, Tom Waits, the White Stripes’ Jack and Meg White, the Wu-Tang Clan’s GZA aqnd RZA, Taylor Mead, Spike Lee’s brother and sister, Cinque and Joie, who play twins (although they are not in real life), and so on. Yet the movie’s two strongest segments belong to actors who were strangers to Jarmusch before making this film. In one, played by Alfred Molina and Steve Coogan, the two men discuss their recently discovered kinship and dance around the subject of celebrity. In the other, Cate Blanchett plays two roles, herself and her cousin, who are sitting in a hotel lobby catching up with each other while also stumbling over the differences in their lives. Themes resonate throughout the episodes: The effects of celebrity are a common thread, as is the appearance of twins or doubles. Jack White shows his Tesla coil to his sister Meg and explains Tesla’s theory of resonance. Indeed, the whole idea of twins or siblings echoes the idea of resonances. A few of the episodes are real duds, but most of them hold some inherent interest. I mean, how could a conversation between Tom Waits and Iggy Pop not be interesting? But even though that segment delivers, the episode starring Bill Murray, RZA, and GZA discussing alternative medicine falls unexpectedly flat. By Jarmusch’s own previously set standards in such films as Stranger Than Paradise, Ghost Dog, and Dead Man, Coffee and Cigarettes serves up a weak brew.