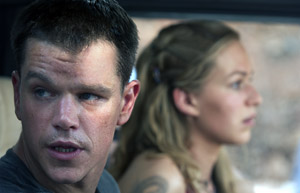 If amnesia victim/former CIA killing machine Jason Bourne (Damon) were a demonstrative man, then some Corleone-style grandstanding – "just when I thought I was out, they pull me back in" – would have been well within his rights. And who could blame him for thinking he was in the clear, having in the previous installment successfully eluded his CIA handlers and disappeared to an exotic island locale with his best girl Marie (Potente)? But The Bourne Identity 2: Jason’s Adventures in Running a Surf Shop With His Cute German Girlfriend this ain’t, so it’s really no surprise when a Russian assassin (Urban) shows up in India to retire Bourne for good. This time, Bourne is running solo, in and out of scenic European cities, with both the Russian assassin and a CIA agent named Pamela Landy (Allen), whose interest in Bourne spikes when his fingerprints inexplicably show up at the crime scene of two murdered agents, on his tail. The problem with running solo, however, is that Bourne doesn’t have anybody to talk to. Sure, he puts in the occasional teasing call to Agent Landy, but there’s no one in Bourne’s close proximity to bounce off of, no one to whom he may deliver that soul-stirring Corleone speech we just know he’s got buried deep in his hired-assassin heart. Potente served that purpose in the first film, and beautifully, providing a pleasingly spacey/spunky contrast to Damon’s ever-furrowed brow. Damon’s still good, an efficient and effective thinking-man’s action hero; it’s simply that his unbearably terse Bourne is an even greater enigma in this second outing than in the first. But if Bourne is a man of few words, then the CIA agents are men and women of too many. They vacillate between barking orders and growling threats, looking and sounding like they’re all mugging to make the trailer cut. At one point, a government official (played by returning actor Brian Cox) snarls to Allen, "You talk about this stuff like you read it in a book" – and indeed, that’s exactly how these people talk. One might argue that talk is cheap in an action flick, but a convincing case for the contrary was made by Liman’s well-rounded, terrifically satisfying precursor. The reins to the sequel have been handed over to Irish filmmaker Paul Greengrass, coming off of the superlative, docudrama-like Bloody Sunday. He’s carried over elements of that film’s cinema verité approach to The Bourne Supremacy – all herky-jerky camera movements and no pussyfooting around with the interior lives of these characters. Much like Bourne, the film is a lean, mean, killing machine, and the action, near constant, is frightfully good – ingeniously choreographed and breathlessly executed, culminating in an extended car chase through snow-swept Moscow that would have made Papa Frankenheimer proud. The film’s denouement, which plays like an afterthought, makes a brief, belated stab at character insight, but it’s enough to make one hope that just around the corner lurks The Bourne Identity 3: In Which Jason Bourne Hunkers Down With His Inner Demons.