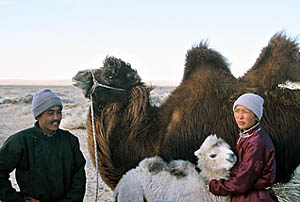 The Story of the Weeping Camel

When William Congreve wrote, "Music has charms to sooth a savage breast," there’s no way he could have had this little Mongolian movie in mind. But, as they say in critics’ boot camp, "If the quote fits, share it." The Story of the Weeping Camel is an unusual film that is part ethnographic documentary and part narrative film. It was made in much the same way as Robert Flaherty’s classic documentaries, Nanook of the North and Man of Aran, in which the subjects of the documentaries "play" themselves in a film story culled from their lives. Originally, the filmmakers (who, at the time, were film students in Germany) intended to make a document of the vanishing lifestyles of the nomads living on the edges of the Gobi Desert, where the economy and lifestyles are based on agriculture and animal husbandry. The story shifted from the general to the specific as they ultimately focused on a single storyline about a mother camel and the newborn albino calf she rejects, as well as the four-generation family that tends them. The story unfolds at its own pace, a pace in sync with the gradual progression of time and seasons. We’re introduced to the various members of this camel-herding clan who live in a very nicely appointed yurt. It’s near the end of the birthing season for the camels when one of them produces an all-white colt that arrives as the end result of a difficult breech birth. The mother refuses to nurse her infant – the result of the birth complications or his unusual appearance, we can only speculate. The family tries to help, as the bleating of the baby continues its sad refrain. The film at this point could have steered itself into anthropomorphized pathos and treacly nature footage. But the family sends its two young boys to the provincial center to fetch a musician whose music, legend has it, will make the camel weep and succor her young. The boys’ journey is tinged with some of the familiar tropes of country bumpkins in the big city. The littlest boy is captivated by ice cream and TV, but the filmmakers smartly don’t overplay these moments. Ultimately, The Story of the Weeping Camel becomes almost a relaxation tool for harried Westerners as it forces us to become one with its rhythms, sounds, and sights. The movie is slight but transfixing. Although the story of the helpless little camel could have been strung together like some simplistic children’s nature tale, the film never lets us forget that we are also observing a family’s economic crisis and the traditions of a vanishing lifestyle. Will the power of music soothe this particular camel’s breast? Who ever thought the truth of Congreve’s oft-quoted words would lie in Mongolia? 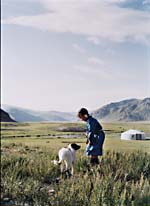