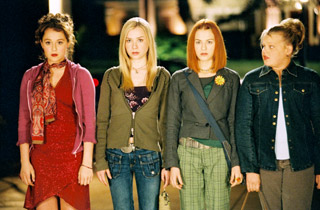 It’s the last day of junior high for Julie (Spy Kids’ Alexa Vega), and she and her best gal pals are celebrating with a sleepover. Mom’s not quite ready to face up to Julie’s advancing age, so strict rules are laid down: no boys, no leaving the house, the like. That’s all well and good, until a rival group of girls shows up to challenge Julie and her friends to a scavenger hunt. To the victor go spoils only a preteen could love: dibs on the popular lunch spot at the high school next year (the losers, meanwhile, must sup by the Dumpster). High stakes, indeed, and so Julie is off, flying in the face of every one of her mom’s rules, and a few of society’s codes of law as well (hijinks include sneaking into a club, trying to buy an alcoholic drink, and fleeing the site of a car accident). Scripter Elisa Bell’s sense of humor ranges from the banal (with wincing declarations, as "for the love of carbs!") to the downright creepy (as when Julie is set up on a cyberdate with her junior high teacher, and then tries to get him to buy her a Sex on the Beach). Ewwww. Throughout, there are bright spots – Curb Your Enthusiasm’s Jeff Garlin pops in as Julie’s clueless dad, and there’s a laugh-out-loud sequence in which three endearingly dorky skate punks don girly wigs and rock out to the Spice Girls. Those boys cruise by every once in a while to aid Julie and her friends in the scavenger hunt, but Julie’s not having it; she has eyes only for Steve, already a junior in high school and your typical BMOC. Steve’s a thoroughly bland choice (and rather age-inappropriate, one might add), but that is indeed the way of the world, or at least the way of the teen movie: Leading ladies just don’t fall for Duckie. (Well, one time she did, and his name was Lloyd Dobler. Some of us are swooning still.) As for Sleepover’s leading lady, Vega has all the sass and approachability she boasted in the Spy Kids trilogy. It’s just that, after having watched the young actress save the world three times over, it’s a little disconcerting to see her preoccupied with something so banal as securing the cool lunch spot. In terms of a preteen instructional, Sleepover offers throughout a laudable emphasis on the importance of friendship, but parents may rightfully flinch at a protagonist who is ultimately rewarded for breaking all the rules. And for what? Youthful insubordination can be a righteous thing, but not when it’s wasted on snaring popularity and some hottie jock. 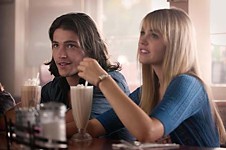 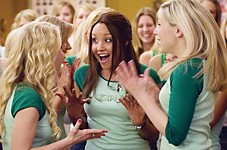 Sydney White
Teen popularity traumas are translated here into a loosely updated version of Snow White and the Seven Dwarfs.