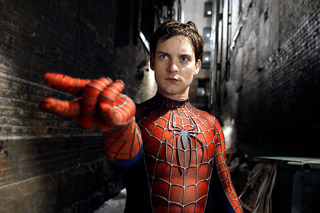 His late Uncle Ben’s statement, "With great power comes great responsibility," may be the one thought echoing foremost in Spider-Man’s mind, but it’s enormously clear that this sage bit of wisdom has also been taken to heart by director Sam Raimi. With this sequel to 2002’s comic-book smash, Raimi has crafted a knock-down, drag-out, emotionally turbocharged movie that manages to live up to its fans’ lofty expectations while simultaneously tweaking the storied sad-sack history of Spidey’s secret identity of Peter Parker in delightful – and, most wondrous of all, satisfyingly realistic – new ways. Marvel’s comic, especially in its original Stan Lee/Steve Ditko form, was always as much about the emotional baggage a person is saddled with when superpowers are thrust upon him than it was about the series’ revolving door of cartoonish villainy. Here, aided and abetted immensely by a terrific script from Ordinary People’s Alvin Sargent (with a co-story credit to, among others, author Michael Chabon, whose own Pulitzer Prize-winning comic-book novel, The Amazing Adventures of Kavalier & Clay, is currently in preproduction), the story of the science geek with the goo-shootin’ wrists is given as much, if not more, screen prominence than his Spandex-clad alter-ego. Raimi and Sargent have created their own superpowered version of Ordinary People and populated it with the most conventional person of all, who just happens to be, well, spectacular. The first film, you may recall, ended on a fittingly morose note, with Columbia student Peter Parker (Maguire) forsaking his one true love, the luminous Mary Jane Watson (Dunst), for the entirely rational notion that a superhero’s babe is forever going to be a supervillain’s bait. This fateful decision carries the character into treacherous emotional waters in the sequel, resulting in a partial loss of his powers and a complete loss of his spi-dentity as he reconsiders his actions and – heaven forfend! – tosses in the red-and-blue towel in favor of a more predictable, if also more banal, life. This is immediately a problem, as it occurs at just about the same time that brilliant scientist Dr. Otto Octavius (Molina in a barrel-chested and beer-bellied performance that sets a new high-water mark for myopic Marvel-adapted madness), while experimenting with that nasty bugaboo fusion, suffers a workplace accident (the sort of workplace accident you ought to expect when you mess with fusion) and is left a widower and furthermore emerges with a shiny new quartet of metal tentacles emerging from his spine that match his lowly flesh-and-blood ones. Driven to evil by those same whipping appendages, "Doc Ock," as Peter Parker’s ever-curmudgeonly boss J. Jonah Jameson (Simmons) at The Daily Bugle has christened him, seeks to rid the city of Spidey and create some sort of vague superweapon. Meanwhile, back at Peter Parker’s heart, the financially struggling antihero finds Mary Jane engaged to Jameson’s astronaut son, Franco’s Harry Osborn (son of the Green Goblin, vanquished in the first film by Spider-Man) can barely contain his seething hatred of the webslinger, and nice old Aunt May (Harris) is nearly destitute. What’s a guy to do? Spider-Man 2’s nicely melodramatic conceit – that great love and greater responsibility are mutually exclusive – is a goldmine for Maguire and Dunst, and the actors have rarely been as emotionally real as they are here in this patently unreal Marvel universe. Dunst’s Mary Jane, in particular, is extremely well-written, with subtle humorous striations shooting through a woeful story of misplaced love. Need I even mention the film’s epic and beautifully staged fight sequences? Raimi has finally recaptured the manic charge he brought to Evil Dead 2; one scene in particular, set aboard an elevated train, is nearly tachycardia-inducing in its sheer breathtaking excitement. Love, death, hope, and hatred: Spider-Man 2 has ’em all, in spades.