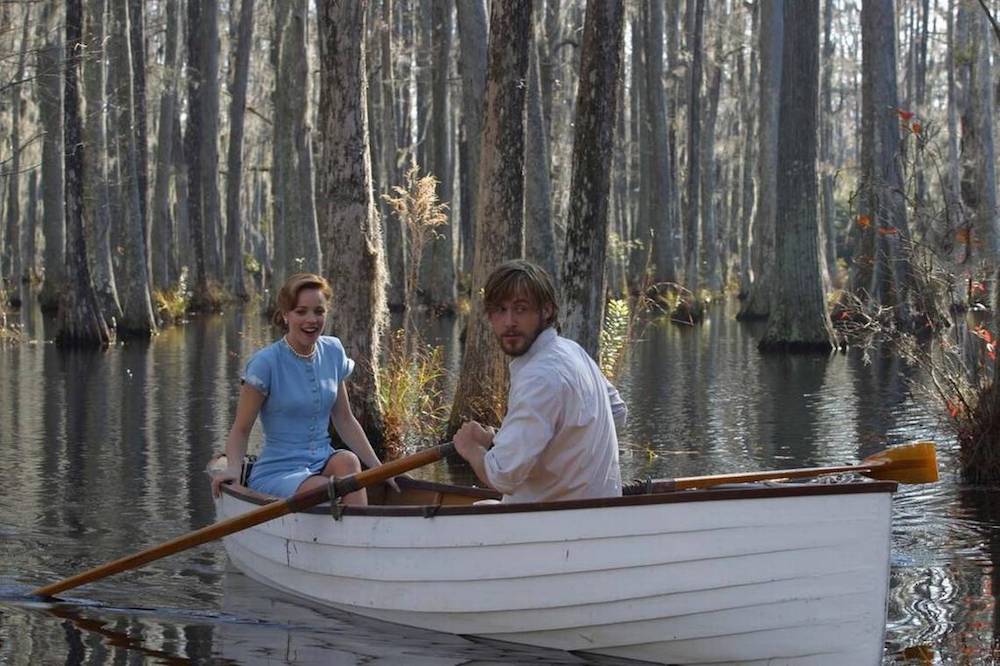 What a glorious weepie The Notebook might have been if they’d just found a way to get rid of the damned notebook. Within its pages is the record of a great love affair, seen in extended flashback sequences, between a boy named Noah (Gosling) and a girl named Allie (McAdams). They’re mismatched lovers – the very best kind – she from a tony Charleston family, he from humbler, mill-worker origins. One summer in North Carolina, just before the outbreak of World War II, they meet and woo, in a manner that is initially sunken in maudlin screen tropes (care of scripters Jan Sardi and Jeremy Leven and, going further back, the source novel by notorious sap Nicholas Sparks, also responsible for Message in a Bottle and A Walk to Remember). But then something quite miraculous happens. Allie and Noah transition from fumbling sweethearts to two young lovers powerfully possessed with one another, which sees them through a half decade of tearful, brawling breakups and makeups, epic misunderstandings, and marriage proposals – including one from Marsden’s Lon, who proves a worthy competitor for Allie’s heart. I think it was somewhere in the middle of a rain-swept declaration of love that I let out a soft little mew – I think you know the kind I’m talking about – that mew of pleasure at finding oneself happily ensconced in glorious weepie land. But back to that damned notebook. Allie and Noah’s love affair is told in flashback, which means there’s a present day that must be attended to. Nursing-home resident Duke (Garner) reads aloud from the notebook to an Alzheimer’s patient not coincidentally named Allie (Rowlands). The film is needlessly coy about modern-day Duke and Allie’s relationship to latter-day Noah and Allie, and it is perhaps that coyness that causes such a disconnect between the two time periods. The past-tense lovers, rendered so fiery and ravenous by the terrific Gosling and McAdams, put the modern-day pair to shame – and, frankly, two screen titans like Garner and Rowlands (who is the director’s mother) deserve far better than this limping On Golden Pond-like hash. As the majority of the film takes place in the past (and a gorgeous-looking past it is, expertly executed in costume design by Karyn Wagner and the sumptuous cinematography of Robert Fraisse), one can forget about Garner and Rowlands – quel blasphème! – for long stretches, but the film’s too-long epilogue deals entirely with them, spelling out themes that were handled far more subtly and more effectively in the past tense. A crying shame, if you ask me.