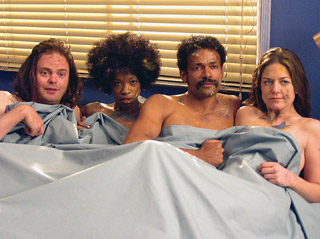 At the end of his 1971 film Sweet Sweetback’s Baad Asssss Song, Melvin Van Peebles, the film’s director and self-titled star, warned audiences: "Watch out – a baad assss nigger is coming to collect some dues." The movie, which is now called the first blaxploitation film, was shot on a minuscule budget and featured an all-black cast (except for the dirty white cops), was lasciviously sexual, and showcased an antihero whose raison d’etre was "sticking it to the man." But not in his wildest dreams (and Melvin Van Peebles is known to have had more than a few) did the filmmaker foresee that the badass coming to collect his dues would be his son, actor and director Mario Van Peebles. Although Baadasssss! is a loving tribute to his father and the man’s crazed passion to get Sweet Sweetback made, the younger Van Peebles also uses the opportunity to settle a few old Oedipal scores (most prominently, the elder’s decision to use his young son Mario in the role of 13-year-old Sweetback in a scene in which he loses his virginity to a prostitute). Mario VP clearly has a few issues still roiling from having grown up the son of this tough and obsessed man, and the portrait he paints of Melvin in Baadasssss! is warts-and-all. Nevertheless, Baadasssss! is a son’s ultimate tribute and gift to his father, promoting Melvin VP’s rightful place in the history of American independent filmmaking and lionizing the filmmaker’s indomitable spirit and vision. Moreover, in Baadasssss!, the younger man steps into his father’s Oedipal shoes to essay the role of Melvin VP. Baadasssss! may occasionally let its fondness for the subject gild the inevitable rough spots, but Melvin Van Peebles’ story is undeniably one hell of a tale. Sweet Sweetback grew out of the ferment of its times: Telling the story of its making also involves locating it within its place in the black power movement and the political turmoil of the late Sixties. Melvin VP had just made The Watermelon Man and could have gone on to sign a three-picture deal in Hollywood instead of forging ahead with this "all-black" film that no one wanted to finance. Among the many things that Baadasssss! is, it is also a movie about moviemaking. In fact, the film should be a primer for anyone about to make an independent film: Its lessons generously appear throughout the story, beginning with the making of the film and on through its editing, advertising, and distribution. The film imparts hard-earned wisdom at every turn. Mario Van Peebles also uses a wealth of other techniques to tease out the truth of this story. Like some documentaries, he uses the strategy of talking-head testimonials from those who worked with the subject (in this case, it’s actors playing characters based on real people). What aspects these speakers leave unexplored, Mario VP supplements with well-placed appearances from Melvin VP’s negative self personified – an actual counter-arguer and self-deprecator. The film also uses old movie imagery that shows us the Hollywood legacy that Melvin was rejecting, one that relegated black actors to roles as mammies and servants and jokers. Additionally, there are surreal Fellini-esque moments that make you wonder what was in that sugar cube. And it’s incredibly funny, to boot. Baadasssss! seethes with well-targeted humor that mixes comfortably with its simmering energy and anger. With this film, Mario Van Peebles delivers his finest work to date, and proves that his father’s legacy lives on.

Redemption Road
This story about a musician who's got the blues because he can't play the blues is a mawkish misfire, but the roadside scenery from Austin to Huntsville, Ala., can't be beat.