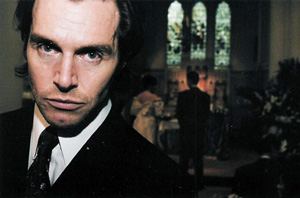 Never before has a film needed so desperately to go straight to video. That said, this unrated, low-budget DV mindwarper from the UK has several things going for it, chief among them a charmingly unctuous performance from lead Howarth as Max Parry, a character who is something of the new millennium’s equivalent of Benoit Poelvoorde’s serial-killing Ben in the 1992 Belgian film Man Bites Dog. There’s also a charming lack of politically correct restraint shown, which counts for more than you might think in a film that’s essentially one long confession of modi operandi from a gloating psychopath. Best of all, however, may be the film’s central conceit, which is also, thanks to the rapid ascent of the DVD format and the fact that audiences will presumably (for now, at least) be watching The Last Horror Movie in a theatre, its greatest weakness: As the stark digital image reminds us time and again, we’re supposed to be watching a rented VHS tape in the comfort of our own home. We’re obviously not, however, and this unavoidable problem defuses much of the creeping dread that the film might have otherwise managed. Howarth’s Max is a wedding videographer by day and an enthusiastically psychoanalytical maniac by night, who has taped his grisly misdeeds and a running commentary thereon over a generic teen slasher horror film, which, in the context of the film’s shadow reality, has then been rented by you, the unsuspecting viewer. The problem, of course, is that Max’s ongoing shattering of the fourth wall is muted by the fact that we’re not at home, we’re at the Alamo Drafthouse (which admittedly might as well be home for a sizable percentage of Austin’s indie filmgoing public). Director Julian Richards (Darklands) has much to say on the topics of horror films and societal violence and the bloody intersection of the two, and all of it comes out of Max’s mouth, as he offers nearly nonstop running commentary over jittery handheld scenes of home-invasion mayhem. Fans of the genre will be quick to point out the similarities between this and Henry: Portrait of a Serial Killer, but whereas John McNaughton’s groundbreaking film took neither sides nor prisoners, Richards’ film is intensely eager to spark debate: "You know this is real," points out the reptilian and annoyingly smug Max, "so why are you still watching it?" The question is repeated ad infinitum in various forms as we’re made privy to chatty Max off the job, enjoying dinner and traipsing into existential overkill with his oblivious girlfriend Petra (Beamish) and friends, as well as his ever-present cameraman (Stevenson), who’s in on the grisly game and eager to try his own hand at it. Despite the film’s horrific verisimilitude (Duct tape! So many uses!) and a genuinely smart screenplay by Richards and James Handel that simultaneously rubs our noses in the horror while allowing us to savor the flavor – and thereby become complicit in Max’s onscreen theatrics – this is still Criminal Psych 101 material that’s been covered and re-covered (and virtually paved over, truth be told) before. Why are we still watching? Because we like to, of course.