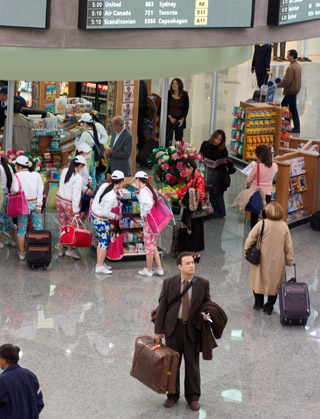 If we were to talk about Spielberg’s film career as being clustered into periods, as we do with Picasso’s blue and pink periods, then we’d have to say Spielberg has entered his Capra phase with his new film The Terminal. Although The Terminal has a comedic brightness that recalls aspects of his last film Catch Me if You Can, Spielberg’s real attention here focuses on the story’s minimal plotline about an average Joe overcoming the bureaucratic roadblocks and power plays that cross his path. It’s an optimistic world-view that features a melting pot of American faces, most of whom want to do good if given the chance, and who like to embrace their folk heroes with group unity and gusto. The director who inadvertently invented the summer blockbuster with the release of Jaws in 1975 has now moved into a more populist phase of his career that tries to introduce democratic ideals and "significance" into his resolutely mainstream movies. It’s a worthy ambition, I suppose, but it does not take into account that our naivete is not nearly as unvarnished as it was in Frank Capra’s heyday of the early sound decades. It’s hard to sell anyone the Brooklyn Bridge anymore, so we’ll see how well Spielberg does with his multicultural, "We Are the World" version of JFK Airport. The story’s deus ex machina has Hanks’ Viktor Navorski stranded in the airport's International Transit Lounge due to a coup that occurred in his fictional Eastern European homeland of Krakozhia while en route. Left without a valid passport or a country he can return to, Viktor is ordered by the paper tiger customs bureaucrat Frank Dixon (Tucci) to wait out the situation. Hours turn into days, then months, as Viktor gradually makes a place for himself within the transitional world of the terminal. "Life is waiting," reminds the movie’s promotional tagline. But what the movie (like John Lennon) is really trying to tell us is that "Life is what happens when you’re busy making other plans." Viktor makes the most of his time in the terminal: making friends, finding employment, and wooing flight attendant Amelia (Zeta-Jones). However, it’s a world where we’re supposed to believe such things as Viktor, who speaks no English upon arrival, learning the language practically overnight form Fodor’s guidebooks. Hanks is phenomenally good in this comedy role, using lots of physical humor and made-up Krakozhian dialect. It’s been a while since we’ve seen him this loose in a movie. All the other supporting work is also good, and the wide variety of ethnicities among the cast members is a decent reminder of our American ideals. Cameraman Janusz Kaminski is a virtual wizard, who, following his work with Spielberg on all his recent films, now adds the stunning glass expanse of the set-created terminal to his résumé of filming dinosaurs, World War II battles, and androids. Seeing The Terminal is like experiencing an uneventful flight: The trip was pleasant but not delightful, and you’re happy to deplane at the other end.