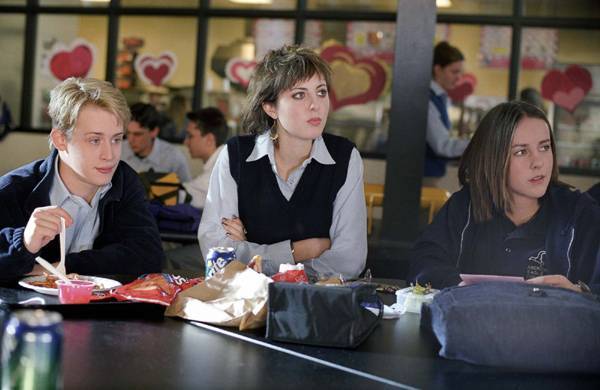 "I’ve been born-again my whole life," 17-year-old Mary (Malone) introduces herself with straight-faced solemnity. In addition to being a Baptist and a literalist, Mary’s also an amateur teleologist, which explains why, when her boyfriend Dean (Faust) comes back from summer vacation gay, she believes it is her Christian duty to save Dean at whatever cost. The end justifies the means, Mary reasons, so she seduces Dean, believing that God will restore her spiritual virginity even if her earthly one just went kaput. Despite Mary’s hard work, Dean stays gay and is soon shipped off to a Christian intervention center, with Mary left lonely, faith-shaken, and pregnant. Mary hides her pregnancy from this ensemble comedy’s eclectic cast of characters, including her best friend, the pretty, popular, and rabidly devout Hilary Faye (Moore, having a very bitchy blast); Hilary Faye’s big brother, the wheelchair-bound Roland (Culkin); and edgy Cassandra (Amurri), infamous at their Baptist high school for being the lone Jew. Saved! has its most fun getting to know these quirky characters and getting its bearings in their cloistered environs, where a typical assembly involves the principal, Pastor Skip (Donovan), mugging like a rock star and asking his students if they’re "ready to get their Christ on." Watching Saved! can feel a little like a giddy rabbit-hole slide into bizarro land for teen-comedy conventions, where suddenly the Head Cheerleader has been supplanted by the biggest Bible thumper, and the burnouts are the ones who haven’t welcomed Jesus into their heart, yet. It’s inspired material, but first-time filmmaker Brian Dannelly (who co-wrote the script with Michael Urban) doesn’t quite go the distance, falling short of his film’s anarchic promise. While Saved! initially gets in some good gags at the expense of religious hypocrisy, it eases off, opting not to skewer religion but rather to poke it gently with a stick to see what happens. What happens is a sweet, often very funny, and ultimately pretty soft satire in which everybody – and I mean everybody – is let off the hook. Unlike the religion he’s turned his lens on, Dannelly preaches tolerance. While that may be the more mature, the more compassionate, approach, it isn’t the nerviest. 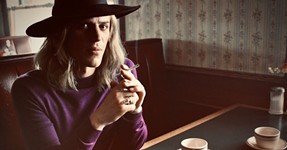 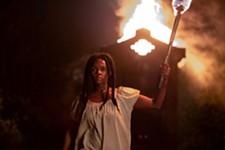