The Chronicles of Riddick

The Chronicles of Riddick, David Twohy’s sequel to his surprise sci-fi sleeper hit of 2000 – Pitch Black – is the opening salvo in what the director and Universal Studios are betting will be the jump gate to a new sci-fi franchise. Stranger things have happened, not the least of them the pairing of Dame Judi Dench as an "elemental" alien being alongside Vin Diesel’s superhuman antihero Riddick. Taking place five years after the events in the previous film, we begin with the escaped killer Riddick as he flees across an ice-bound planetoid dodging a group of mercenaries eager to collect the bounty on his head. In short order, the extremely reluctant hero is forced to cast his lot against a monstrous legion of psycho-religious world-conquerors, nicely deemed the Necromongers, who are led by their Lord Marshal (Feore) and who, like those pesky Borg before them, are hellbent on assimilating every society with which they come into contact. This race of killers, and indeed the whole film, has labored and layered overtones of religiosity – "Convert or die" is the credo, and it seems to be working. Meanwhile, Riddick rediscovers an old friend from the first film (then called Jack and here, having transformed herself into a mad-dog killer not unlike Riddick himself, rechristened Kyra). As played by Davalos, she’s a bit of a mystery, although it’s clear that the character is here to somewhat humanize the feral Riddick. The pleasure of The Chronicles of Riddick comes mostly from the fascinating and outlandishly detailed production design, which sprawls across the screen in nearly every shot, with the Necromongers' gigantic starships looking similar to those strange stone heads on Easter Island. Diesel is fine in a role that requires little of him but his gravelly baritone and some serious ass-kicking. And Feore, as the soul-sucking Necromonger overlord, is equally engaging in a Darth Vader sort of way, as he orders his clanking minions to "kill them all" and other nefarious platitudes. But perhaps the most daring bit of flimflammery in this bloated-but-enjoyable production is the (perhaps unconscious) allegorical allusions to the United States’ current imperialist mindset toward the globe. The Necromongers' cry of "join or die" echoes President Bush’s "You’re either with us or against us" foreign policy, and Riddick’s bad guys, intent on forcing their own brand of "old time religion" on the rest of the universe are a clear parallel to the Bush administration’s view that Iraq (and presumably the rest of the Middle East) needs democracy whether they want it or not. A sci-fi popcorn actioner as deeply subversive current-events commentary? Why not? 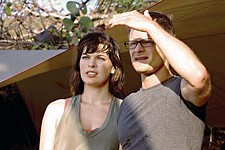