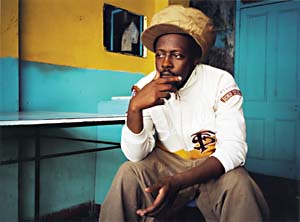 Trying to make heads or tails out of the country of Haiti at any given moment is something akin to attempting to navigate your way through The Shining’s hellish topiary maze – no matter how sure you are of anything, there’s always another dead end up ahead. Not only that, but it’s the kind of dead end that appears at first to be otherwise; you’re sure you’re going in the right direction, but that’s so rarely the case, with the political blindsides and dangerous switchbacks, that you might as well give up and pray that your flare gun still works. That may seem like an overly cinematic analogy, but the more I think about it in terms of Jonathan Demme’s remarkable, melancholy, and ultimately hopeful documentary, the more it appears to be altogether accurate. Demme’s film covers the life (and eventually death) of Jean Dominique, a educated Haitian revolutionary disguised as a mild-mannered, scholarly radio personality-cum-"agronomist." The lanky, toothy, loquacious Dominique, along with his wife Michéle Montas, sought to use the populist medium of radio to instill in his countrymen a sense of possibility, of what could be. It’s easy for those of us in the States to write about and pay tribute to such combustible martyrs as Dominique from a country like Haiti, wracked as it has been by every conceivable disaster – from the 1960s rule of Papa Doc Duvalier to that despot’s offspring, Baby Doc Duvalier, to the AIDS crisis, stultifying poverty, and beyond. Haiti, at times, seems cursed, but Demme’s inspiring film presents Dominique as indefatigable in his calm, sensible dialogues (via the airwaves) with those most pedestrian Haitians, the working-class backbone of the country. When Dominique first took to the airwaves on the down-at-the-heels AM radio outlet Radio Haiti Inter, he parlayed his program into a platform to empower a desperately needed sense of national Haitian identity and spiritual uplift, as well as his own highly populist political viewpoints, which included, charmingly, a love for French New Wave cinema. The film’s title is a nod to Dominique’s unshakably humble self-image. He never saw his lot as that of a revolutionary, instead choosing to refer to himself as an agronomist. Having studied agronomy and crop genetics while at university in France, he’s shown here saying all he was ever interested in was "trying to improve the quality of plant life in Haiti, cocoa, coffee, corn." It’s fitting that this scholar and accidental social savior should view himself in such humble, earthy tones, and he loved to speak – he sounds downright loamy, and full of ruddy, practical, well-tilled wisdom, despite run-ins with the dreaded TonTon Macoute (Duvalier’s strong-arm thugs who terrorized Haiti for so long), who drove Dominique to exile in New York in the 1990s. Jean-Bertrand Aristide’s democratic election in February, 1991, which Dominique supported, seemed like a turning point for the country but ended up, recently, something of a disaster, with CIA overtones. Outspoken to the end, Dominique, who made a point of utilizing not only French but "Kreyol," the language of Haiti’s working class, as a means of connecting with and empowering the peasantry who clearly loved him, was shot down outside his radio station in 2000. Demme’s fine, riveting, and finally joyous film is a fitting capstone to the life of a man who made a difference in a time and place where it was (and is) so much easier not to.

Tyranny Killed the Radio Star
Jonathan Demme on 'The Agronomist' The Passion of the Journalist
Jonathan Demme on 'The Agronomist,' his tribute to Radio Haiti's bravest voice for democracy