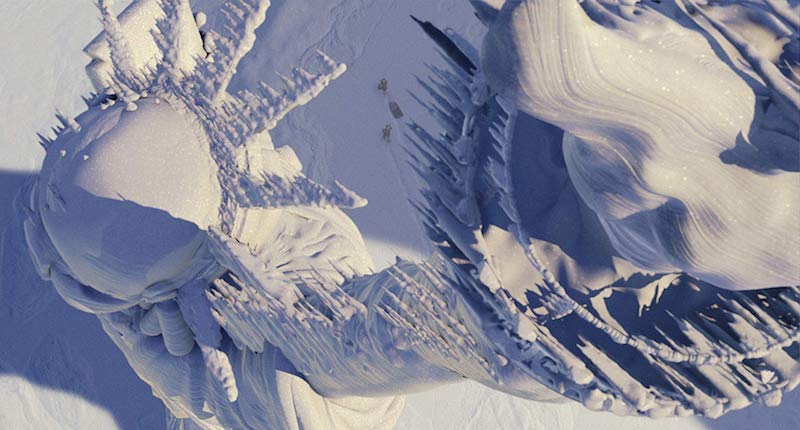 Poor New York City. As if it didn’t have enough to worry about these days, director Roland Emmerich, who previously blew the Big Apple to pieces in Independence Day and lost a gigantic green Digimon in its cavernous byways in Godzilla has now returned to not only flood the city but flash-freeze it as well – along with virtually all of the Northern Hemisphere. (Apparently the Native Americans had the right idea when they handed over Manhattan to the Dutch.)

This newest popcorn disaster film is right in line with the director’s previous outings – the plot schematics closely mirror those films, with the protagonists having to venture far from safety to rescue wayward loved ones caught up in the chaos – but tempered this time with an eco-friendly message sure to provoke screeds from Rush Limbaugh and his ilk and furrowed brows from the Greens. Politics aside, this tale of the near-instantaneous onset of another ice age caused by global warming is great fun for those of us who enjoy watching civilization take a pounding now and again. (It speaks to some sort of collective masochism that we take such pleasure in watching ourselves be flattened, or, more likely, we just get a kick out of destruction – cinematically it does, after all, date back at least to 1936’s San Francisco, if not the early silent newsreels.)

Quaid plays paleoclimatologist Jack Hall, who, along with scientist Ian Holm, discovers that unchecked global warming has caused a disruption of the planet’s warm water ocean currents, which in turn causes huge ice shelves to calve off of the poles and raise sea levels precipitously. Cue nature’s wrath at the United States’ shortsighted pummeling of the Kyoto Accord and enter cyclones that smash Los Angeles, bowling ball-sized hail in Japan, and land-borne hurricanes across the globe that funnel in subzero temperatures from the upper atmosphere and unleash blizzards and worse on the upper 48. Quaid, in full "I told you so" mode, sets off to track down son Sam (Gyllenhaal) in NYC while a Dick Cheney look-alike watches haplessly from D.C. as thousands of Americans migrate southward in a nifty dig at the nation’s continuing illegal immigrant debate.

Emmerich’s sense of irony has rarely been so pointed, and The Day After Tomorrow, for all its obvious cataclysmic set-pieces and stock characterizations, is nothing if not timely. Of course, the principal reason to see the film is for the gargantuan special-effects work, which has New York deluged by a monstrous tsunami that cascades over the Twin Towers’ footprint and washes the scum off the street, finally vindicating Taxi Driver’s Travis Bickle. Does The Day After Tomorrow merit all the press it has been generating? Probably not, as there’s precious little original about it, but Emmerich knows full well the value of subverting pre-existing visual iconography and so has the Statue of Liberty swathed in icicles, her torch and crown rising up above the newly snowy wasteland à la Planet of the Apes. It’s an image that will stick with you, even if the movie itself doesn’t.