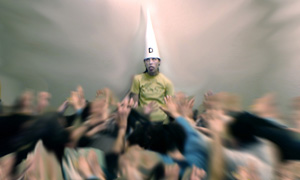 As director Nerenberg points out, repeatedly, in his amusing and horrifying documentary, the subject of human intelligence has been studied since time immemorial, but there are few treatises on the subject of human stupidity. Nerenberg and the various talking heads he’s assembled credit this phenomenon – for want of a better explanation – to researchers’ fears of being seen as stupid. Everyone already knows what makes people stupid, the line of reasoning seems to go, so the vast majority of scientific papers ignore the root causes and head, instead, straight to the smart guys. Nerenberg, a smartass and the man behind the popular Trailervision.com Web site, has taken the proverbial bait on this one and dives deep into the moron pool in an attempt to explain the powerful lure of stupidity, using techniques that sometimes echo Michael Moore’s blink-and-you’ll-miss-it documentary style. Breaking down his topic into easily digestible bits (presumably for the less gifted among his audience), Stupidity mines the fertile fields of its subject and comes up with any number of explanations; chief among them is the notion that it’s just so much easier on the brain to be an idiot than it is to be a scholar. Anyone with an eye toward recent pop culture and reality TV can back him up on that one. The American cultural landscape certainly poses no barriers to being, to put it bluntly, a moron. To back up his various theories, Nerenberg employs quotes from Noam Chomsky, American Psychological Association president Dr. Robert J. Sternberg, pundit Bill Maher (who blames it all on youth culture), and former CNN and 20/20 producer Danny Schecter, among others. In between the talking heads, Stupidity teems with images of the dumb leading the idiotic, be it the unexpected popularity of MTV’s Jackass or President Bush’s unending stream of malapropisms. "Dumb is sexy" is another of the film’s arguments, one that can hardly be argued with a straight face in the, um, face of Paris Hilton and her Internet ilk. From Fifties-era "duck and cover" exercises to the surreal questioning of actress Salma Hayek by a media member who is overeager to know how she felt wearing a unibrow while portraying artist Frida Kahlo, Stupidity is relentless in its pursuit of an intellectual handle on a decidedly anti-intellectual topic. Stripped of Nerenberg’s hyperwit, the film might well have been too depressing to watch. "Only two things are infinite," Albert Einstein is quoted as saying, "the universe, and human stupidity, and I’m not sure about the former." Well, duh.