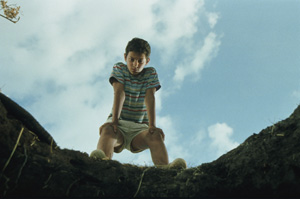 Despite the brave face on the title, 10-year-old Michele (Cristiano) is scared, if only for a little bit, when he discovers, while playing in an abandoned house, a hole in the ground covered with some corrugated aluminum siding, beneath which is a feral-seeming creature with filthy blond hair and an imposing lack of conversational skills. The beastie turns out to be a kidnapped boy – Filippo (Di Pierro) – who has been tossed in the dank pit by a local gang of criminals who are apparently trying to make some money in the best way they know. It’s 1978 in sun-dappled southern Italy, and jobs are scarce, but both wheat and nefarious deeds are in abundance, and as Michele forges a strange friendship with the imprisoned boy by bringing him water and food, he also comes to realize that his own rural family may be involved in the crime. This film by Salvatores (Mediterraneo) is a wonderful and strange thing, made up of equal parts David Lynch (as in that director’s films, evil chooses to hide in the sunlight here as well) and early Fellini (Michele’s tiny village seems forever to be awaiting the arrival of a strongman or some such Fellini-esque representative, but generally has to make due with the traveling knickknack salesman). The combination is overlaid with a glossy and blindingly bright coat of sensible summer sunshine, so much so that at times audience members may blink along with little Filippo, who keeps his eyes firmly shut through much of the film in order to avoid the harsh glare that reigns everywhere outside his black little home away from home. (Cinematographer Italo Petriccione lights and shoots everything as though it were three inches from the sun – I’m Not Scared fairly smolders, and the constant sound of grinding crickets only adds to the eerie brilliance.) Salvatores’ smartest play (again, echoing Lynch) is to film the proceedings entirely from the perspective of Michele, who, despite getting a quick grip on the bad vibes lurking in plain sight, also lives in an entirely childlike world, spending much if not all of the film riding his bike into and across the endless, rolling hills of wheat. Cristiano infuses Michele with a wide-eyed innocence that isn’t even shattered by his painful discovery. If anything, Michele becomes more childlike, sneaking out food to Filippo and planning with the genuine zeal of a 10-year-old to remove Filippo from his troubles. The rest of the compact cast is equally fine. As Michele’s father, Abbrescia is both the loving dad who spends time every day arm wrestling with his offspring and the man who tends to more adult matters after nightfall. The late arrival of Sergio (the animalistic Abatantuono), a boisterous and dangerous houseguest from Brazil, only adds to Michele’s woes. By far the most gorgeous slice of sunlit sadism so far this summer, I’m Not Scared also manages to be oddly sweet: a boy’s life, with treachery.