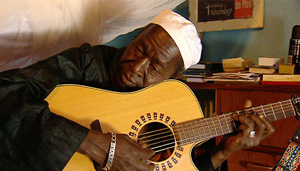 I'll Sing for You

There is a moment in this documentary about Mali blues giant Boubacar Traoré that unintentionally recalls the scene from Lost in Translation in which a Japanese filmmaker’s lengthy direction to Bill Murray is comically condensed by the translator to a few words. I’ll Sing For You documents Traoré – who is known as KarKar – returning home after a long time gone; the heartfelt, protracted greeting from an old friend is reduced to a simple, subtitled, "Welcome back." That disorienting sense of having missed out on crucial – or at least notable – information plagues the entire film. It’s difficult to determine if the filmmakers presume a prior working knowledge of "le Bluesman du Mali" or if they just don’t get that they’re not getting their point across; either way, the undeniably fascinating life of this musician and cultural icon is poorly charted onscreen. The basics of KarKar’s biography are delivered in a scattershot, "did-we-forget-to-mention-that?" fashion, such as the first mention, way into the film, of his second wife and their son; neither is ever seen, and their existence is not mentioned again. Nor do we learn much about his cultural and political role in Mali, even though KarKar’s music emblematized the spirit of revolution in the Sixties. Throughout, little bits of KarKar’s exotic, winding life are revealed, such as his twin, seemingly conflicting devotions to Islam and mysticism, but these bits are never explored to revelatory effect. Perhaps the filmmakers simply believe the music should speak for itself, and the music is indeed stirring; one feels far closer to understanding KarKar when he strums an acoustic guitar and sings of women, revolution, and religion than during any of the (always, frustratingly, uncredited) talking-head accounts. Perhaps that emphasis on performance over content, historical context, or narrative coherence was the filmmakers’ intention – there’s really no telling. An effective documentary – maybe an effective film, in general – makes the audience feel taken care of and oblivious to all the wire work. An effective documentary does not force the viewer to ask maddening questions like, "Who’s talking right now?" or "When did he move to Paris?" or "Huh? He gave up music to sell children’s underwear?" An effective documentary does not make the audience feel that they are being mentally mashed by inexpert hands. KarKar – who seems like a nice fella, though I don’t really know much about him – deserves a more fitting tribute.

I'll Sing for You, Jacques Sarasin