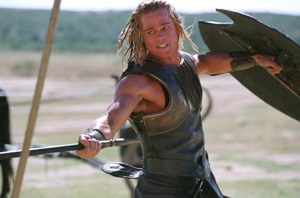 Any film that pairs Peter O’Toole and Julie Christie in a mega-budget adaptation of Homer’s The Iliad has something going for it by sheer virtue of those two living legends' unassailable screen prowess. And it works, up to a point. For all its bombast and hugely dull battle scenes, of which there are many, the film is worth seeing if only to refresh your memory of O’Toole’s monstrously magnetic personality. Every time the actor appears, as Priam, the king of besieged Troy, he commands the screen with a formidable ease utterly lacking in many of his castmates. Unfortunately, neither he nor Christie (as the goddess Thetis, who with Zeus spawned Achilles) are given enough screen time to salvage this overlong and oddly tame retelling of one of history’s greatest battles. For those who were absent from high school English that day, the seeds of war are sown when Paris (Bloom), the prince of Troy, falls in love and absconds with Helen (Kruger), the wife of Menelaus (Gleeson), the king of Sparta. Understandably miffed at this sorry turn of events, Menelaus turns to his warmongering brother Agamemnon (Cox), the Mycenaean king, and appeals to him to help retrieve Menelaus’ wayward spouse. Agamemnon, who’s been lusting after Troy for ages, readily agrees, and the pair set sail with all the armies of Greece – and an armada of 1,000 ships – to bring Troy to its knees. And then there’s the film’s (and Homer’s) dramatic wild card, Achilles (Pitt), the greatest warrior of them all, who fights not for Agamemnon, but for the glory of his own name. He’s a mercenary demigod as buffed and bronzed and self-involved as a rogue queer porn star, petulant and feral. Pitt does indeed look godlike here, and the surfer-kid charm he first trotted out in Thelma & Louise has been refined over the intervening years into a kind of iconic laconicism; his Achilles seems bored by all the talk, talk, talk of the kings he serves and only comes to life on the battlefield, or, it should go without saying, the boudoir. Petersen (Das Boot) and screenwriter David Benioff (25th Hour) have taken a number of liberties with the original Homerian text – for a story set in a polytheistic age there’s scarcely a god in sight, for one thing – and instead pile on the pseudo-epic battlefield carnage, which, while impressive, grows repetitive and stagy after the first three melees. With the help of CGI – the majority of it seamlessly done – The Iliad finally has a semiaccurate cinematic representation, and when the seemingly endless armies of Agamemnon crest the beachhead outside the walled city of Troy, lining the horizon as far as the eye can see, it’s one of the few moments of truly epic grandeur in a film that strives mightily to match the tone of the greatest story ever told. Armies are one thing, however, and emotional resonance entirely another, and here the filmmakers get bogged down by the story’s massive structural pull. Orlando Bloom’s Paris and Diane Kruger’s Helen appear more like hollow high schoolers sneaking out of their parents’ houses than the romantic figureheads they should be, and Paris’ brother Hector (Bana) is forever adrift in a sea of exposition. Petersen, a director who knows his way around a crane shot better than almost anyone, rallies his troops but can’t ignite his actors, and the end result is the sound and fury of Homer undone. 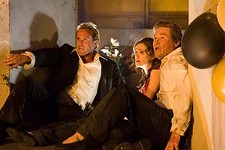 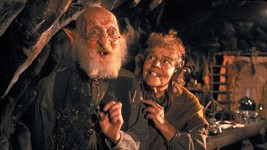 The Neverending Story
In this inventive and inspiring fantasy, the book that's read by the story's hero actually comes to life.