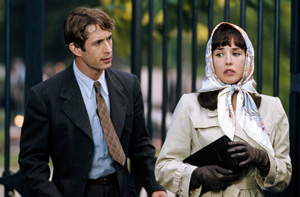 A lavish period piece set in France at the beginning of World War II, Bon Voyage concocts an unlikely chamber comedy in the midst of its wartime backdrop. The movie works very much better than this merger of tones sounds like it might. Director Rappeneau (Cyrano de Bergerac, The Horseman on the Roof) keeps the story moving at a quick comic clip while also dangling just enough mystery and intrigue to keep us interested in the plot and mindful that the Nazis are knocking at the front door. The story begins as the French cabinet and much of the country’s well-to-do population is moving from Paris to Bordeaux in order to put greater distance between themselves and the Nazi Party. Central among them is the beautiful and opportunistic movie diva Viviane Denvers (Adjani). She is living with a vacillating cabinet minister (a slimmed-down Depardieu), whose protection she desires. However, in one of the movie’s opening scenes, a dead man is dragged from her apartment by her enamored young admirer Frédéric Auger (Derangère), who winds up going to jail when the dead man is discovered in the trunk of the car he is driving. There’s also a seemingly tangential storyline about a Jewish professor, and his samples of heavy water used in nuclear fusion studies, who must escape to England. The professor and his lovely young assistant Camille (Ledoyen) keep crossing paths with Viviane and Frédéric, although it’s a while before we can understand how these meandering storylines intersect. This portrait of 1940 France on the verge of capitulating to the Vichy regime is intriguing. However, what keeps the movie engaging is its nutty tone. Characters are always running everywhere in Bon Voyage: running in and out of rooms, to and fro, chasing, escaping, and out-distancing one another. Adjani (The Story of Adèle H, Camille Claudel) has one of the most delightful roles of her career as the self-absorbed actress who lives her life as though it were a perpetual stage. Bon Voyage charms with its insouciant attitude toward the impending calamity surrounding the characters, but its froth may wear thin for some viewers. 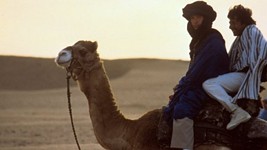