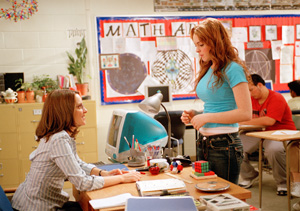 With a title like this, a script by acerbic SNL-er Fey, and a basis in Rosalind Wiseman’s anthropological high school tome Queen Bees and Wannabes, you might expect this clique comedy to have some bite. It does, in moments – but not enough to elevate Mean Girls above the pack of teen fare. (For a truly searing indictment of teenage groupthink and popular-kid power, nothing can yet touch Michael Lehmann’s Heathers.) The film is visibly torn between satirizing the excesses of suburban princessdom (Poehler is terrifying as a blowsy but "cool" McMansion mom who mixes daiquiris while her preteen daughter vamps like a rap-video chickenhead) and proffering an earnest solution to girl-on-girl terrorism. The latter scenes come out treacly, the former half-hearted. And it’s too bad; the project has a lot of wasted potential. Lohan is fine as Cady, a former homeschooler who "mainstreams" into a posh Illinois suburb after a childhood in Africa. (This contrivance allows Fey to make explicit Wiseman’s labored metaphors about the "jungle" mentality in high school society.) She’s hot, of course, so the Heathers – I mean, the Plastics (McAdams, Chabert, and Seyfried) – glom onto her. With encouragement from two art dorks (Lizzy Caplan and Daniel Franzese, who are so diverting the movie should be about them), Cady infiltrates the Plastics in order to end their reign of terror. But will the power of popularity turn her Plastic, as well? Fey has a lovely sense of comic timing and understatement, so she’s quite good at building the characters’ world. ("If you touch each other," a health-ed coach intones, "you will get chlamydia.") But like so many other sketch-comedy writers, building a sustained narrative is not her métier, and the direction by Waters (Freaky Friday) is too shapeless to keep the dramatic momentum consistent all the way through to the Big Dance Scene. Wistful voiceover explains too much and, even worse, interrupts the requisite Teen Movie Climactic Speech. These missteps interfere with what might have otherwise been a more subversive statement with a proto-feminist subtext. The world will have to keep waiting for that movie. One scene gets it dreadfully right: The Plastics stand in front of a full-length mirror, each taking verbal inventory of her own minuscule physical faults. Then they turn to Cady and wait for her to join in. It’s a scary and true moment; the film needs more of them. 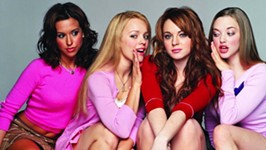