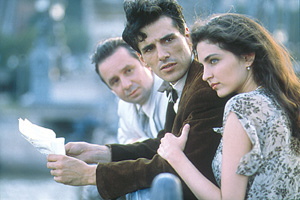 This broody German-language melodrama, which has been creeping into theatres Stateside in a rolling release, is a lovely, thought-provoking sleeper. One doesn’t imagine date-night crowds queuing up for a tragic love story set in 1930s Budapest, soundtracked by the lachrymose titular ballad; more’s the pity, because Gloomy Sunday is a fine effort. It’s full of big feelings and sweeping copter shots of the Danube, fateful choices timed to the swelling of the orchestral score. It wears its heart on its sleeve. It is not cynical. It reminded me of Vittorio de Sica’s The Garden of the Finzi-Continis, another grand pan-European production about the vagaries of love, ambition and dreams, betrayal and sacrifice – all of which are crushed under the approaching heel of Nazism. People struggle to scratch out happiness, to outpace depression and dread, or even to simply advance forward with their lives uneventfully, but their efforts all meet with the same unimaginably horrific outcome. Both films end on a note of grim inevitability as their narratives intersect with history; we know the rest already. The rest of Gloomy Sunday is familiar terrain, as well – the compromises made for love. When melancholic pianist Andras Arandi (Dionisi) arrives late to his audition at Szabó’s restaurant and locks eyes with waitress Ilona (Marozsán), their fate is sealed – even though proprietor Lazlo (Król) is her lover. "I’d still rather have a part of Ilona than none at all," the men agree, and so life goes on as a ménage. Andras writes a sad tune – "Gloomy Sunday" – and with Lazlo managing his composing career, the song becomes an international smash. Unfortunately, it often drives its listeners to suicide. But the real trouble is Wieck (Becker) a visiting entrepreneur who’s smitten with Ilona. First he’s raving about the superior German craftsmanship of his Leica; soon he’s commanding a military outpost and "saving" wealthy Jews in exchange for their property and valuables. Moments of black comedy break up the melodrama – a newsreel depicts the song’s "victims" and a Nazi secretary rages against her Duden grammar manual – but the overall tone is still that of a four-alarm weeper. By film’s end, though, it’s added up to more than the sum of its parts, like so many stories that backdrop the horrors of the Holocaust against the everyday beating of hearts.