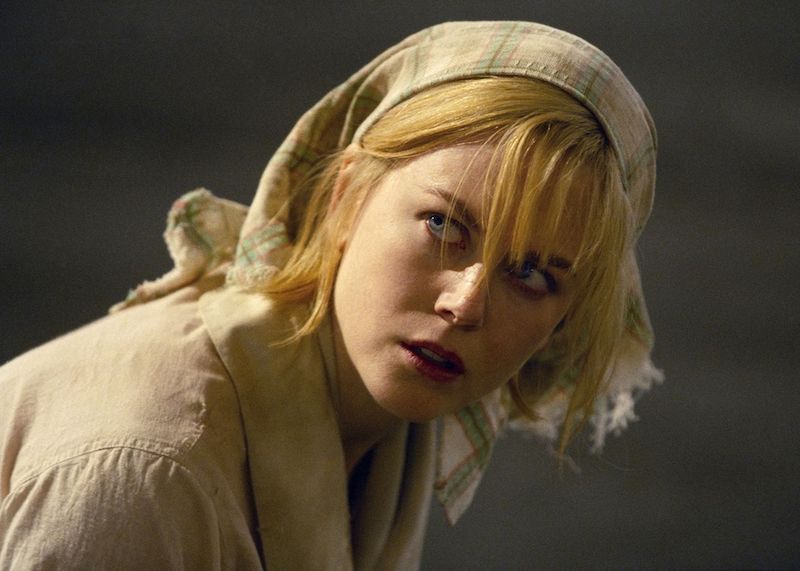 The Danish director Lars von Trier (Breaking the Waves, Dancer in the Dark) has made the most masterful film of his storied career. Yet what he has achieved in technical audacity and precision of expression, he has lost in the art of human connection. So skillful in its means of storytelling, Dogville nevertheless transmits such universal misanthropy that the self-loathing the viewer is gripped with at the end of the movie is more powerful than any appreciation of the gifts that came before. Moreover, von Trier reserves a special venom for Americans, and were there any doubt of this singling out of a whole nationality just wait for the film’s closing credits as David Bowie’s "Young Americans" plays over pictures of the hardscrabble faces recorded in the photographs taken during the Depression by the Works Progress Administration. The film is perhaps the most stylized of all von Trier’s films, yet it may also be the most stripped down. It starts with an overhead shot of the tiny Rocky Mountain community of Dogville – a sound stage with white lines marking the parameters of the houses, shops, and the abandoned silver mine at the edge of town. There is virtually no set decor, stark emptiness surrounds these characters as they deliver their lines and interact. The tone is somewhat reminiscent of the American classic Our Town or some medieval morality play. The story begins as the portentously named Grace (Kidman) enters the isolated town while being chased by gangsters. She is discovered by the town’s self-appointed spokesman Tom Edison (Bettany), who implores the community to take in Grace and hide her. Eventually, he coaxes everyone to chip in to give the woman work so she can earn her keep and remain in the community. Tom, if ever there were one, is a miner for a heart of gold, which he thinks he can find in Grace, who will inspire the entire town toward moral improvement. And so Grace begins her tour of duty, cheerfully reading to the blind Jack McKay (Gazzara), tending the gooseberry bushes for Ma Ginger (Bacall), babysitting for Vera (Clarkson), and so on. Everyone has chores for her to do, and so the seasons pass. Then one day a policeman comes by and tacks up a "Wanted" poster of Grace, and everyone’s attitude changes just a little bit. Suddenly, there is general displeasure with the manner in which Grace performs her tasks, and, little by little, they start treating her worse and worse. For nearly three hours, von Trier shows us Grace’s saga in Dogville. The hopes for moral improvement that started off so strongly are decimated by the movie’s end. The cast is spectacular, though von Trier’s vision leaves none of them unscathed. Von Trier locates the monster that resides in every human being and unleashes its full fury. It’s a gruesome sight, and although we may cheer the movie’s evisceration of false modesty, rationalization, and deception, it will also leave many viewers feeling spattered with the rancid remains. Von Trier’s vision is amazingly thorough and exquisitely executed, but the audience may feel executed as well.