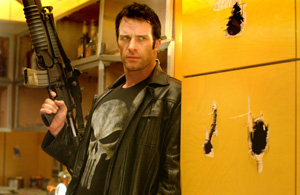 The Punisher is such a bad film that it becomes inadvertently entertaining; it’s enough to make you pine for the original version of the black-clad Marvel Comics’ badass, played to awful imperfection in 1989 by Dolph Lundgren. This second attempt is much more fully developed, or, at least, has better firearms and some of the most daringly insipid comic moments ever committed to an action film. You’ll never look at operatic pasta preparation in the same way again. Strapping, lantern-jawed Thomas Jane (Deep Blue Sea) plays Frank Castle, an undercover FBI agent who pulls off that ever-ill-advised "one last job," which accidentally results in the demise of the son of criminal kingpin Howard Saint (Travolta, rivaling his Battlefield Earth performance for sheer, blustery badness). Things then escalate into the slaughter of Castle’s entire extended family. Donning the skull-emblazoned logo T-shirt his young son gave him moments before being run down by Saint’s thugs, arming himself to the teeth and then some, and, finally, slamming down a few gallons of Wild Turkey, Castle embarks on a seriously vicious rampage of revenge (or, as he notes in his five-point plan of action, "punishment") and begins to eliminate Saint’s people, one by bloody one. He takes up residence in the seedy part of Tampa (and that’s "Tampa, Florida," as the subtitles make sure to inform, just in case anyone might have mistaken the sun-drenched shores for Tampa, Maine) and falls in with a new "family" made up of a winningly sweet ex-junkie (Romijn-Stamos) and her 12-steppin’ pals, equips himself with a very nice and highly modified GTO, and generally begins to behave like a Warren Oates character on PCP. "Vaya con dios, amigo – go with God," offers one character regarding Castle’s family massacre. Castle’s muzzle-fire reply? "God’s gonna sit this one out." Oh, yeah, baby, it is to laugh. Jane, who speaks with the bizarre delivery of Highlander’s Christopher Lambert (he sounds poorly dubbed even though he isn’t), plays this broad vendetta of a character ramrod straight, which turns The Punisher into an overwrought, melodramatic comedy. It doesn’t help matters that the script, from Hensleigh and Michael France, has more holes in it than all of its corpses put together, and never misses an opportunity to milk any bad action cliché. And then there’s the issue of the film’s maddening and repeated homages to George Miller’s Mad Max – the sequence featuring the death of Castle’s wife and son is an exacting re-creation of the same scene in Miller’s vastly superior (and equally grim) film, as is this film’s final act of explosive vengeance. It’s all well and good to have homages in your films – credit where credit is due and all that – but Hensleigh's quotes feel more like blatant theft. The worldview of this particular Marvel character has always been excessively dark: He's a righteous force of nature in much the same vein as novelist Andrew Vachss’ cold-steel Burke, especially in his interactions with his new streetwise family, but whereas Vachss chilly killer knows he’s damaged goods, Castle just comes off like a dangerous nutjob, especially as Jane plays him. But – and let’s be honest here – The Punisher is big fun, in the sense that I laughed almost until I wept, a cathartic experience if ever there were one. Where’s Wolverine when we really need him? 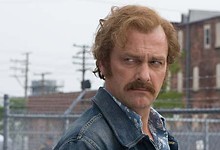 Kill the Irishman
The life of Danny Greene, an Irish mobster in Cleveland during the Sixties and Seventies, is recounted in this film.