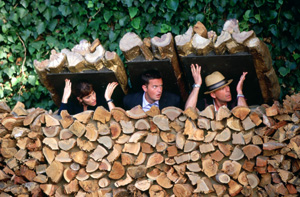 The Whole Ten Years is more like it – that’s how torpid this sequel to 2000’s hitman farce The Whole Nine Yards is. But the previous film doubled its budget, so here we are. The original creative team bows to screenwriter George Gallo, a Hollywood journeyman whose debut with Midnight Run deteriorated into buddy crap like See Spot Run and Double Take, and Deutch (Getting Even With Dad) is at the helm. You don’t expect a sophisticated parlor comedy with those credentials. Here’s what you’ll get: As reformed hitman and aspiring father Jimmy "the Tulip" Tudeski, Willis moans drunkenly about his defective semen and cries like a tubercular old woman. Fussbudget dentist Perry yammers cutely and trips over the ottoman. Peet, a trigger-fingered would-be hitwoman, whines and bickers with new hubby Jimmy. Henstridge, having been kidnapped, sits around with a 108-year-old Romanian matriarch whose rat-a-tat flatulence brings down the house. Pollak seems to be enjoying himself as a crime boss who looks like a cross between Liberace and Menachem Begin, spewing malapropisms (some of which are inconsistent with others) and being heralded by kooky klezmer riffs in the score. That’s fine, I guess. But what in the shit is this movie about? It flounders around as a byzantine yet boring chase story for its first half. Then as it’s finally gaining momentum in the third act, the whole affair shifts gears into a caper flick – at which point it’s too late to care. And it has problems with tone; Deutch – the quintessential family-film man – doesn’t seem to trust the material as black comedy, so we end up with a kute ’n’ kuddly odd-couple comedy in which the principals are constantly pointing guns at each other and growling out dialogue like "If you ever grab me like that again I’ll put a knife in your face." There’s not enough menace to authenticate these statements. Are they supposed to be funny? It’s hard to say what the filmmakers’ intent is. The characters all feel like concoctions, like synthetic movie people forged in a crucible of Red Bull during late-night meetings at the studio compound. It’s hard to care about whether they get chloroformed or shot or farted on by elderly widows. 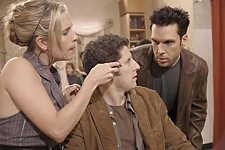