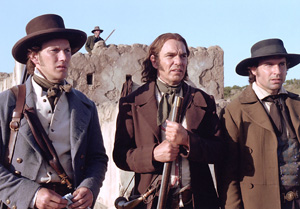 After enough scathing rumors to sink most projects twice its budget, Disney/Imagine’s The Alamo has finally arrived, cut down to a manageable 135 minutes from an original running time of somewhere in the vicinity of three-plus hours. There’s no Russell Crowe, of course – both he and original director Ron Howard jumped ship early on, leaving The Rookie’s John Lee Hancock in charge of what then appeared to be something of a sinking ship – but we do get the legendary (to the APD, anyway) Jason Patric as slave-ownin’, knife-wieldin’, tubercular tough Jim Bowie, which has got to be almost as entertaining as Crowe’s proto-Texan accent would have been. Hancock’s film is a big, blustery, popcorn-revisionist history of the events that unfolded in 1836 San Antonio, rife with outsized characters and freighted with the full weight of Texas legend atop it. It’s loud – the cannon fire alone could wake the Alamo dead – and its sense of ballyhoo is pure Hollywood, but despite all the Sturm und Drang of this version of the 13-day siege and Gen. Sam Houston’s (Quaid) post-Alamo routing of Santa Anna’s (Echevarría) army, the film lacks the emotional, doomed punch for which it’s so clearly striving. Much of this has to do with the structure, which doesn’t end, as you would assume, with the bloody fall of the Alamo but with Houston’s dogged (and tactically valid but dramatically uninvolving) non-pursuit of the Mexican army. Much like Michael Bay’s Pearl Harbor, Hancock’s film seems unsure just where and when to end. That said, there are two excellent performances that make things far more tolerable than they have any right to be. Not surprisingly, the first comes from Billy Bob Thornton as David "Davy" Crockett, the Tennessean and former U.S. congressman who’s still best known for his coonskin cap and bear-fightin’ abilities. Thornton takes the character and runs with it, presumably in directions not in John Sayles’ original script (now credited to Leslie Bohem, Stephen Gaghan, and Hancock), and although a sequence of him playing counterpoint fiddle to the strident strains of the Mexican army’s marching band while standing backlit atop the Alamo parapets is something my high school Texas history class failed to mention, the sheer oddness of the moment, combined with Thornton’s obvious relish, makes it peculiarly affecting. There’s also a wallopingly bizarre bit of fireside chat of the sort Robert Shaw perfected in Jaws’ much-imitated U.S.S. Indianapolis speech, during which Crockett’s distaste for "taters" is revealed to be a nasty byproduct of his unfortunate and, the film would have it, somewhat false status as living legend. The film’s other, and far more intense, performance arrives in the form of Spanish actor Jordi Mollà (Blow), who, with his drowsy eyes and brooding mien, manages to make the small and generally thankless role of Capt. Juan Seguin into a quietly smoldering bonfire of its own. On the other hand, Quaid’s Houston is a surly, opportunistic drunkard, Patrick Wilson’s Col. Travis seems to have wandered in from hanging out with Matthew Broderick’s Col. Shaw in Glory, and Santa Anna is a sadistic peacock who compares his troops’ lives to those of barnyard fowl. It’s The Alamo, all right, but will anyone want to remember it? Maybe not, but by the time a dead Mexican soldier floats by facedown in a stream to signal film’s end, you’ll likely be wondering if a visit to a Texas history museum might not be such a bad idea, if only to clear up that whole "tater" thing.