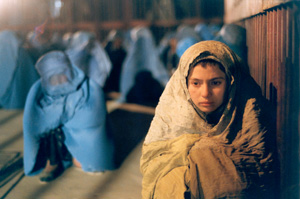 Osama begins in fear and ends in terror. In between there’s all manner of hopelessness, deprivation, and death, which is to say that as the first film to come out of a post-Taliban Afghanistan, it’s practically a documentary. Regardless of your opinions on U.S. foreign policy in a post-9/11 world, if even half of the misogynistic and human-rights atrocities that occur during this film’s brief 82 minutes are accurate – and we have no reason to believe they’re not – the toppling of the Taliban by American forces was almost certainly morally and intellectually justified. Confusing Islam with the Taliban – even though the latter attempted (and continues to attempt) to merge the two into one ramrod-straight ideological poleaxe – is a trap that Westerners have occasionally fallen into, but Barmak’s film makes possible no such mistake. The Taliban, patrolling the streets of Kabul in battered Toyota pickup trucks with two men in the cramped cab and four or five in the bed, resemble nothing so much as a group of day laborers heading out to a job site, until, of course, you notice the flyaway beards, the sweat-soiled turbans, and the ever-present AK-47s slung low over their shoulders in a death-pale imitation of the migrant workers’ rucksack. As the 12-year-old daughter of a war-widow physician (Sahar), Osama (Golbahari) is forced by circumstance to help feed her mother and grandmother when the mother’s barely there, guerrilla medical practice fails to bring in even any bread to eat. This shattered family, living in a squalor that looks more medieval than modern, is so close to the edge of starvation you can hear the dust in their voices. The mother’s desperate solution: Cut her daughter’s hair and send her out into Kabul disguised as a boy to beg for work – under the Taliban, women were forbidden to work or even leave the house unescorted by a blood relative. The ruse works until Osama (we never learn her real, feminine name) is rounded up by the Taliban and forced alongside dozens of other boys into a madrassa where she has only one ally, a wild-eyed young boy who has guessed her secret but for some reason doesn’t let on to the mullahs. Osama is painfully realistic – shot on the filthy streets and decrepit alleys of occupied Kabul, first-time director Barmak rounded up his own cast from refugee camps and humanitarian shelters – what you see is what you get is what there is, and, remarkably, what there is is some astonishingly accomplished acting, particularly from lead Golbahari, who, with her plummy lips and wide, almond eyes has an acute physical resemblance to Natalie Portman circa Léon. She also shares Portman’s doelike physical grace: Trying to pass herself off as a boy she transforms her innate femininity – what there is of it, anyway – into the darting, stop/start lurch of a young male. It doesn’t take. For all the grim, resolute awfulness of Osama’s hyperrealistic storyline, the thought that the Taliban has finally been driven from power lingers above the closing credits like a slippery dream of a better tomorrow. It’s horrific, to be sure, but in many of the most important ways, it’s also, finally, over.