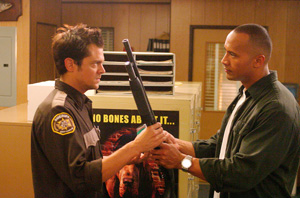 Hewing closely to the original's basic storyline, this contemporary remake of the 1973 grassroots classic retains and updates the basic plot points while losing much of the original’s heart and soul. The story is based on the experiences of Tennessee Sheriff Buford Pusser, a retired wrestler who returns home with his family to start afresh but gets on the wrong side of the shady powers-that-be who have taken over the sleepy Tennessee town. He fights them with his big four-by-four stick, having sworn off guns despite being a decorated former member of the U.S. Special Forces. This remake transplants the story to the U.S. Northwest, where the town’s biggest employer, the lumber mill, has been supplanted by a casino, and the original’s central battle against crooked moonshiners has been updated to a problem with drugs. The story’s contemporizing keeps intact the hero’s aversion to modern growth and moral corruption. The Rock, a real-life wrestler turned movie star, is a good choice as the new hero of Walking Tall, replacing Joe Don Baker in the original. The substitution retains the muscularity of the Sheriff Pusser role, but in turn loses some of Baker’s Southern beefcake charm. The Rock performs reasonably well in this role that requires more acting from him than in any of his previous films, but his range is extremely limited. It’s Johnny Knoxville (aka Jackass), who plays Sheriff Pusser’s old friend and new deputy, who comes away from this film showing more of his acting talent and effortless charm. Director Phil Karlson’s original had a greater sense of urgency to it, the illusion of a hard-hitting journalistic scoop. Twenty-one years later the story becomes more of a perfunctory backdrop on which to hang lots of bloody fighting, which director Bray handles with reasonable dexterity. As in the original, the necessity of guns is upheld by story’s end, but it seems as though some of the intrinsic themes of the story have been downplayed in favor of more fight sequences. The film’s running time is 86 minutes, although 12 of those minutes are devoted to an extremely slow crawl of closing credits – seeming proof that there wasn’t enough material here to sustain a feature-length movie.