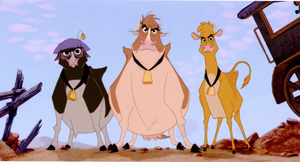 Well, I’d take my kid to it, were he big enough to hold down the folding seat. This genial, animated Disney Western, which has been in the works since 2000 and was held up to make way for last year’s disappointing Brother Bear, is a good bet for family viewing. It’s got a charming, simple plot; a smart Alan Menken score; and enough subversive humor to wring a chuckle or two out of Mom and Dad. And don’t worry – Roseanne doesn’t sing. (Rather, k.d. lang, Bonnie Raitt, and Randy Quaid do.) The erstwhile Mrs. Arnold voices Maggie, a hefty prize heifer ("Yeah, they’re real," she notes, of her bag. "Quit staring."), who’s sold off to the Patch of Heaven farm when her old ranch gets rousted by redoubtable rustler Alameda Slim (Quaid). Her brash manner and ostentatious belching offend the farm’s head cow (voiced with delightful sniffiness by Dench) and soft-spoken sidekick (Tilly). But when shady Slim sets his sights on Patch of Heaven, the gals lock horns to save their homestead. It’s fitting that this is Disney’s last traditionally animated feature; the whole affair has a warm, nostalgic feel to it and bursts with the down-home brio of an old-school Saturday matinee: the "Sons of the Pioneers"-type choral theme song ("Justice is here and wearing udders!"), the Monument Valley landscape, the winking cow-puncher corniness, the ragtag band of underdogs, the wholesome message ("You don’t sell family"). Listen closely, and you’ll catch Ann Richards in a cameo as a sassy saloonkeeper. Quaid gets to show off in a yodeling number that turns into a psychedelic bovine Busby Berkeley riot, and an animated Steve Buscemi pops up before the big finale in that ubiquitous abandoned mine shaft. Best of all, it’s short and not syrupy. There’s an undeniable proto-feminist subtext, too. The heroines aren’t those sickening wasp-waisted Disney kewpies; in fact, their farm appears to be a woman-run organic farming collective. The kiddos won’t pick up on it, but c’mon – k.d. lang singing about her "little patch of heaven way out west"? Is this a gynocentric utopia or what? 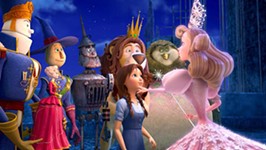 Home on the Range, Will Finn, John Sanford