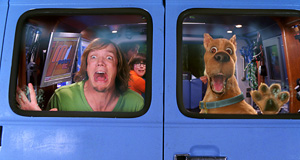 What I wouldn’t give for a stuntman in a rubber mask with gills. In this sequel – which is blessedly, blissfully Scrappy-free and for that reason alone better than its predecessor – nostalgia abounds, but the monster hijinks are so frenetic that even the kids in the theatre were pinned to their seats with CGI-induced stupor. They sprang to life once, chortling when Shaggy (Lillard) and Scooby (voiced by Neil Fanning) farted on a nemesis. Otherwise not a peep. The movie’s noisy enough on its own, quick-marching its audience from one topical "celebrity" cameo (hip-hoppers Big Brovaz) to the next (American Idol Ruben Studdard), with David Newman’s score of Elfmanesque gothica and celestial choral theatrics boxing our ears in the interim. I’m not a fan of the "Bigger, Faster, More!" school of family entertainment – the low tech fart gag got a better reception than any of the costly yet stupid-looking effects – and when the product placement is so thoroughgoing as to have permeated the dialogue ("How come we can’t ever investigate, like, a Burger King or something?" Shaggy whines), it’s time to unmask the filmmakers as a bunch of hacks. So how is it that there’s just something about Scooby? There’s something appealing about all that topstitching and Gellar’s purple crocheted ponchos. There’s something about Cardellini, who will never make the Hollywood A-list but has a genuinely warm presence on camera and is lovely to watch. There’s something enjoyable about Prinze’s perfectly blank studmuffin stare; he seems to like wearing it. There’s something about Shaggy’s brown crushed-velvet tuxedo and Lillard’s goofball mien ("Like, they’re totally having a montage in there without us!" he whines about the rest of the gang). Maybe it’s that the movie is so incredibly antic that Lillard seems right at home in it for a change, instead of like a lone voyager from Overacting Planet, where Adam West is king. Or maybe it’s just the way the cast visibly revels in all that cheese – the corny monsters (Chickenstein), the loopy logic, the pop-music needle-drops (when Shaggy and Scooby unearth a dusty gramophone, of course it jumps to life with "Baby Got Back"). This is not a family movie; the kids will be bored by it. This is a guilty pleasure for thirtysomething stoners with ironic dispositions and large nacho platters. Gosnell could have saved a lot of clams by putting a grip in the Captain Cutler suit.