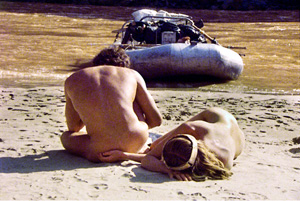 In this film, Robb Moss wades in the water of his younger self and comes away with some nice observations about the cycle of life, even though none of his film’s revelations probe too deeply. Moss uses footage he shot at the end of the summer of 1978 when he was a river guide. He and 16 other river guides took a monthlong trip down the Colorado, something these twentysomethings frequently did, although this was one of Moss’ last trips, and he used the opportunity to shoot the footage for his first film, Riverdogs. Now the filmmaker returns to that footage of the group’s "unscheduled, communal, outdoor life" as a tool to compare and contrast their lives in the past and the present. Moss focuses on five individuals. The most obvious change in their lives is the adoption of clothing, as the river footage shows them frolicking on the river in a near-constant state of undress, a state that interestingly comes across as more natural and comfortable than most nakedness appears on film. The film records marriages, a divorce, and the raising of children. Two subjects became mayors of their small communities. One faces testicular cancer, another teaches aerobics and grapples with whether to tell her children the truth about her drug-taking experiences. Only one still works as a river guide and lives off the land, now a bit socially awkward around people despite having been the river guides’ totemic hero back in the day. Moss shows the footage of their younger, sleeker selves to the five and encourages their comments (a tactic that, perhaps unfairly, makes them seem self-absorbed), yet their thoughts provide wisdom no deeper than this answer to why they always went around naked: "Because we could." Every once in a while, we sense the filmmaker touching on ideas about the choices we make in life and their consequences, but the film never really delves into this gritty matter. The Same River Twice is at its best when the camera imposes on the subjects’ daily lives and catches more unguarded and honest moments. The movie offers glimmers of truth about the aging process, but there is always the sense that Moss only wades knee-high into this river.