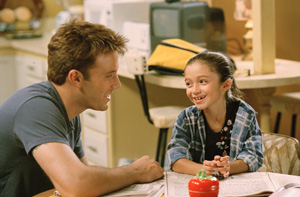 Before Jersey Girl screened at the Paramount Theatre during SXSW, Kevin Smith took the stage for a short introduction-cum-comedy routine in which he conceded that, after a career built on foul-mouthed and irreverent comedies, his new film was "about as edgy as a fucking spoon." That crack – crassly funny and perceptive – is emblematic of why Smith’s early films worked so well. Within their modest, audience-specific ambitions, films like Clerks and Mallrats were gleefuly trashy good fun, and even when Smith stretched beyond straight comedy, as in Chasing Amy, he never strayed from his chief strengths – a commitment to exposing the seedier (read: most honest) parts of people, that foul-mouthed irreverence, and a distinct, distinctly un-Hollywood way of looking at the world. Jersey Girl – Smith’s most "adult" film to date – trades those strengths for an admittedly heartfelt but resoundingly toothless foray into family dramedy. Affleck, a longtime Smith collaborator, stars as Ollie Trinke, a Manhattan publicist who must abandon the big city and move back to his hometown in New Jersey when his wife (Lopez) dies giving birth to their new daughter and he loses his job after a very public and embarrassing meltdown. The film then cuts to seven years later, as Ollie grapples with daughter Gertie (Castro), his wisecracking, tough-love dad (Carlin), and an unfulfilling career filling in potholes. "Seven years later" is an uneasy transition, it turns out: After the first act’s heavily waterworks premise, the audience is primed for a character transformation film, but all that transforming takes place in the seven years that pass without a camera fixed on it. Instead, the conflict of the piece comes from Ollie’s stop-and-start re-entry into the romantic fray and his attempts to get a foothold back in the publicity business. The love interest comes by way of a snappy grad student named Maya, played by Liv Tyler; the largely flatline Jersey Girl happily skips a beat when the charming and sly Tyler enters the picture, so full of promise and toothy grins is she. Alas, her story takes a backseat to Ollie’s far less emotionally involving struggle for professional satisfaction. The film’s other bright spot is the big-eyed Raquel Castro; she does a fine job balancing an old-soul wisdom and sass with the vulnerability required of her age. In short, she acts the pants off of Ben Affleck, but then, so could that aforementioned pothole. When thick in the comedy portions of the script, Affleck has his likable moments (especially when he’s playing off of Tyler), but he fails the dramatic material completely. There is something so puppy-dog earnest about his straining for dramatic resonance that the gut instinct is to shield one’s eyes: It’s all so embarrassing that to look away seems the only polite course of action. But if Affleck stumbles, Smith’s script does nothing to catch his fall. Surprisingly, Smith’s truest talent – that of writing – is Jersey Girl’s weakest link. (On the flip side, the film is visually quite nice, certainly Smith’s best-looking film yet.) Alongside Tarantino, Smith was the Nineties’ indie-film go-to man for sharp social and pop-culture critique; the "skewering" here is feckless and flat, possibly because it’s too soon to lampoon mid-Nineties culture (the film begins in 1994), but I don’t think such lines as "like the Fresh Prince of Bel-Air is ever going to have a movie career" would ever score a laugh outside of a sitcom studio audience. Structurally, the film is a drag, and by the third act so completely runs out of steam that Smith resorts to back-to-back montages set to song (first Fleetwood Mac, then Springsteen) and a final school performance that – while cutely performed – still screams of creative desperation. Jersey Girl is obviously a very personal film for Smith – it comes on the heels of the birth of his own daughter and is dedicated to the memory of his father – and its heart is in the right place. Unfortunately, that heart is about the only element here that doesn’t strain credibility. 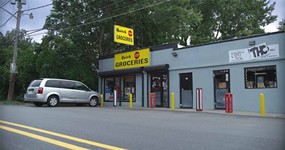