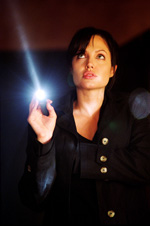 Taking Lives is a twist ending in search of its movie. En route to the ending, we see the lovely city of Quebec, drenched in broody rain and shot in a series of exaggerated low angles; we see arguments about departmental territorialism, so typical of the boilerplate police procedural; we see the "creepy" expert profiler (Jolie) abed at various crime scenes, mussing the evidence while she channels a serial killer as might the Amazing Kreskin. This adaptation of Michael Pye’s eponymous thriller strays so far from its source that screenwriter Jon Bokenkamp is also credited with its "screen story." The revisions downplay the novel’s more high-minded interest in the plasticity of identity in order to emphasize Jolie, a hotshot FBI agent called in to track a killer who assumes his victims’ identities, and her questionable romantic involvement with a witness. The filmmakers have reworked the material into a star vehicle. Little attention is paid to the killer’s psychology and motivations. In one scene, with helpful visual aids, Jolie provides all the necessary exposition. Great effort is made, on the other hand, to class up the production with an assaultive Philip Glass score, moody interiors (such as a nightclub bathroom lit entirely with neon), and a supporting cast of character-actor stalwarts (Anglade, for one, is lovely to watch as a weary, rumpled police detective). But there’s really not much of a point to all this prettiness – it only makes for a more stylish turkey. Likewise the fuss over Jolie’s nude scene is misdirected. Yes, of course she looks fabulous, but in amassing all these Good Things to Look At the filmmakers have neglected the essentials of an effective mystery: suspense, depth of characterization, and logic. (We are to believe, for one, that the Quebécois police department can perform a three-dimensional skull reconstruction but apparently lacks a sketch artist.) Or allow me to just quote another guy leaving the theatre: "That was a rental. A 49-cent rental."