The pace of this political thriller about a Nazi collaborator on the run for four decades is on par with the speed at which the system ultimately brings this murderous fugitive to justice – it listlessly plods along without any seeming purpose in sight. Director Jewison has made socially minded films that are a notch above the mundane (The Hurricane, In the Heat of the Night), but here he hasn’t a clue how to tell this story taken from recent headlines. The film’s central character, Pierre Bossard (Caine), is based on Paul Touvier, an officer in the Vichy government during World War II who was captured in southern France in 1989 and convicted of the murder of seven Jews during the war. The film’s intertwining plot lines – Bossard’s flight across France, the French government’s pursuit of him, and a mysterious assassin’s pursuit of him as well – lack any dramatic tension whatsoever, constantly clunking into one another each time the movie shifts from one thread to another. What’s more, there’s no energy in Jewison’s direction; scenes play interminably at times, like the almost laughable one in which a fatigued Bossard narrowly escapes government authorities as he flees across the rooftops of an abbey. In some ways, The Statement evokes sympathy for its principal character, a grandfatherly man with a heart condition who has spent most of his adult life in hiding. As portrayed by Caine, you’re drawn to him, despite the unspeakable nature of his crimes against humanity. But lest you feel too sorry for this frightened man, the script periodically underscores the cunning and ruthlessness that has kept Bossard alive for so many years. In this regard, the occasional shooting of someone as a matter of survival pales in comparison to the emotional manipulation of which he is capable. In the film’s killer scene between Bossard and the wife he has abandoned (Rampling, who gives the film’s best performance) are mesmerizing, as the usually pious Bossard displays his true colors while making not-so-subtle threats to ensure that she’ll allow him to stay with her for a while. Screenwriter Ronald Harwood had greater success with his previous screenplay about another man in hiding (The Pianist), and he doesn’t capitalize very well on the film’s political angle involving the Catholic Church’s role in hiding war criminals. Even the one intriguing element of the plot – Who is trying to assassinate Brossard as the authorities track him down? – becomes obvious all too soon, depriving the film of any mystery or suspense. By the time The Statement comes to its inevitable conclusion, you’ll be hard-pressed to remember much about it, sadly enough. In other words, The Statement doesn’t make much of one. 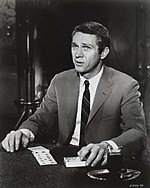