Everything about Agent Cody Banks 2 reeks of hurry up and make this movie before its kid star Frankie Muniz loses his pubescent looks (it’s already borderline). This kiddie spy franchise has nothing on Robert Rodriguez’s Spy Kids troika: Where the Spy Kids movies are playful and clever, Cody Banks 2 is merely creepy and predictable. Plus, this Cody Banks sequel is minus the original’s Hilary Duff, who is turning out to be a proven asset to any film in which she appears. Instead, this film introduces Hannah Spearritt, a comely young Brit who might turn anyone’s destination to London. As in the original, the sequel sports a panoply of spy gadgets and product placements, exploding Mentos being a prime example. The movie even has its own Q, the gadget master of the Bond movies, though the reference is likely to be lost on the PG crowd. The addition of comic actor Anthony Anderson as Cody’s CIA sidekick adds to the film’s pacing, but his performance is uncomfortably close to minstrelry as he vamps as an overweight agent on probation and exiled to London. The story’s action begins at the summer camp for the CIA kiddie corps, Kamp Woody. (If you have problems with the innuendoes of the camp name, you’ll probably also take issue with the character named Sir Jerkalot. However, the obligatory PG-film fart joke is underplayed, almost as though it were an afterthought.) After the assault on Kamp Woody, Cody is sent to England undercover as a clarinetist in a student orchestra. From here, the movie moves quickly enough, if not always logically. By the end, Cody returns home to what is probably his hardest undercover gig: Convincing his clueless parents and little brother that he is just a regular American kid. 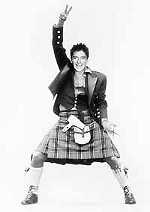 The Big Tease
Not reviewed at press time. Press materials for this Scottish comedy describe the story as “Rocky in curlers,” while The Los Angeles Times review describes ...