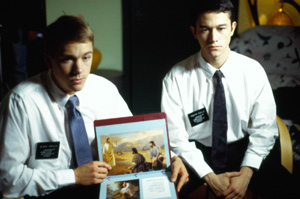 This gay-themed romantic drama is a typical first feature in many ways; writer-director (and Sweet Home Alabama scribe) Cox is too reliant on his screenplay. There are lots of Big Speeches, Dickensian external mechanisms drive the plot, and the film is too long. The myriad supporting characters sandbag the action (sadly, Buffy’s Benson is among them) and pull from the energy between the leads. But the filmmakers deserve props – big ones – for creating a love story in which the conflict goes beyond the circumstantial (so typical in "opposites attract"-style romances) and into the realm of the spiritual. We’re used to seeing lovers kept apart by meddling friends, disapproving parents, cultural differences, even fate. When party-loving L.A. waiter Christian (Ramsey) and his shy neighbor Aaron (Sandvoss) meet cute on move-in day, Latter Days looks like it’s shaping up to be a similar across-the-way love story. The difference is that Aaron is a Mormon missionary from Idaho, and Cox (who was raised in the Church of Jesus Christ of Latter-Day Saints) takes his faith seriously. It’s not just that Christian wears Lycra short-shorts to spinning class and brings guys home every night. It’s not just that Aaron studies the Bible on his stoop, wears sacred underpants, and can’t drink beer. The movie respects Aaron’s sincere desire to base his life on spiritual belief – a desire Christian doesn’t share. The film is sensitive to the choices and sacrifices people make for their faith, whether that faith is codified in religious tradition or expressed through charity toward and acceptance of others. That’s the good news. The other good news is that Sandvoss, in particular, is an appealing, likable lead, and the script has some funny surprises in store. (There’s a cute scene with a fellow named "Watersports Mort.") The bad news? Like too many gay indie films, Latter Days gives us a screen diva (Bisset) to up its cachet; Bisset flounces around in fleecy scarves, dispensing Crown and homophilic homilies and chewing up the scenery. And watch out for Place, who’s trying to spring into three full dimensions as Aaron’s devout mother but is made to snarl threats ("Stay away from my son!") and drop her crockery meaningfully. It’s High Drama, and not in a good way. The end of the film edges toward camp, and the sudden arrival of surreal dream sequences threatens to push it over the side. The movie is more sophisticated when it’s not trying to be complex.