The Book of Mormon Movie, Volume 1: The Journey 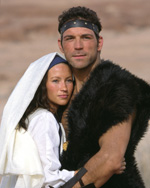 Where’s Steve Reeves when we really need him? Even in his present condition, the former Hercules could emote up a storm compared to The Book of Mormon Movie’s Noah Danby, who plays straight-shootin’ Mormon icon Nephi with all the finesse of a golem. Lensed in and around Salt Lake City on a $2 million budget, the film is nothing if not ambitious, but director Gary Rogers’ vision far outstrips the abilities of both his crew and cast. As a proselytizing tool, the leaden acting, tablecloth wardrobe, and Sixties-era Star Trek set design are more likely to leave nonbelievers stupefied than awestruck, while Craig Clyde’s rambling script, which annoyingly employs both Biblical thou-isms and modern-day colloquialisms, is far too literal in bringing the big Book to the big screen. This is but the first film in Rogers’ projected nine-film chronicle depicting the entire Book of Mormon page by page, and at this point it’s well-nigh impossible to think of a sinner wicked enough to be forced to sit through the entire series. Portentously, the film opens with a syntactical error so laughable that it feels like a cruel joke on the filmmakers: the title "Jerusalem About – 600 BC." I don’t know where Jerusalem About is, but 600BC was a long time ago, which explains why everybody looks like either David Hasselhoff or Maya Rudolph. Or does it? No matter – for fans of truly bad cinema, The Book of Mormon Movie is something of a comedy goldmine, with an unimaginatively archetypal Voice of God (and speaking of Steve Reeves, where the hell is Orson Welles when we need him?), Michael Flynn turning in a ripping good Edward G. Robinson impersonation as the villainous Laban, and sinister siblings Laman and Lemuel (Gollaher, Foulger) running rampant with Stone Age stilettos and waywardness like some Hebraic version of the Bowery Boys’ Leo Gorcey and Huntz Hall. Up against Mel Gibson’s ultrarealistic The Passion of the Christ, The Book of Mormon Movie comes off as a Herschell Gordon Lewis film minus the gore. With its liberal use of what appear to be Styrofoam interiors, you sit through the duration of the film half expecting James T. Kirk to wander into frame with Spock and Bones in tow, seeking to avert the destruction of "Jerusalem 9" by the Romulans. All things considered, and strictly from a layman’s cinematic perspective, The Book of Mormon Movie would have been better served (and tremendously more engaging) had it been cast with Muppets. Sam the Eagle as God? Kermit as Nephi? Now that’s entertainment.