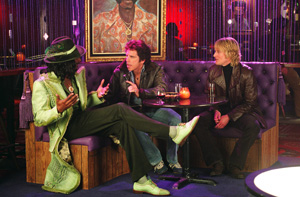 The highlight of this satirical remake of ABC’s mid-Seventies buddy-cop anomaly is named, unsurprisingly, Will Ferrell, who plays an imprisoned con with a penchant for dragons in all forms. The scene in which he trades info with Bay City undercover detectives David Starsky (Stiller) and Ken "Hutch" Hutchinson (Wilson) by having Hutch act like a sexy, hissing serpent for the purpose of filing away the image in his mental store of jailhouse erotica, is sublime in the depths of depraved silliness it mines. Only Ferrell, I think, could pull off such a bizarre sequence and render it not only unrepentantly goofy, but also, somehow, God help us, borderline touching. The rest of the film isn’t nearly as stunningly ridiculous, however, although director Todd Phillips, who scored a hit last year with the equally oddball Old School, has a goldmine at his command in the forms of Stiller and Wilson. Their previous teaming on Stiller’s own Zoolander (again, with the unforgettable Ferrell) ratcheted up the ludicrousness to levels not seen stateside since Monty Python was a fresh import. By comparison, Starsky & Hutch is somewhat tepid and traditional, a buddy-cop movie predicated on the fact that viewers will recall the glory days of Paul Michael Glaser and David Soul and their legendarily violent, frequently homoerotic adventures in distributing beat-downs and beach-bunny beddings in equal and profligate measure. The film’s plot, such as it is, has the pair on the trail of nefarious Bay City cocaine magnate (played by Vaughn), who’s smuggling the stuff into town disguised as – aha! – nondairy creamer, of a sort. (And honestly, how many times do you think just such a snafu has occurred on the Hollywood party circuit? A MacGuffin like this practically begs for less comedy and more documentary.) Bodies are piling up, as are a pair of buxom young things in the form of the freshly Navarroed Carmen Elektra and Road Trip’s Amy Smart, who plays the San Bernadino Valley girl-next-door porn archetype with such sassy vigor she makes Marilyn Chambers look like she needs to switch from Ivory to straight pumice. Increasingly rail-thin hip-hop icon Snoop Dogg shows up as the duo's street-level stool pigeon and all-around mack, Huggy Bear, a righteous provider of information both streetwise and sartorial. His sinsemilla-inflected delivery is appropriate to the role, but he's not Antonio Fargas. And then there’s the Red Tomato, Starsky’s cherry crimson Ford Gran Torino that was always the real star of the show (and, locally, has inspired this weekend’s real-life Alamo Drafthouse Road Rally), which is sailed, skidded, and slid into various and sundry positions that make the sexual antics of its flesh-and-blood counterparts look positively flaccid by comparison. Go Speed Racer, indeed. Many of the gags here are hit or miss, but Wilson and Stiller’s unflappable charm and the obvious fun they’re having translates into precious little witlessness; it might not be as over-the-top as Zoolander was, but Starsky & Hutch exudes a gangly, laconic charm, as when a sober, cool-as-ice Hutch is forced to care for his suddenly cocaine-addled partner after one of those tragic nondairy-creamer mishaps. Feel the love? Baby, you can taste it.