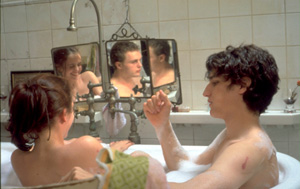 Three kids laze about in a bathtub together, stoned and arguing politics with the typically starry-eyed idealism of adolescence. Just outside their safe haven, Paris is in the full roil of May ’68, a civil unrest that kicked off with the closing of the famed Cinémathèque and the sacking of its director, Henry Langlois (an action that inspired Godard, Truffaut, and just about every other member of the French cultural elite to hit the streets), and culminated in violent student strikes that eventually shut down the government. It is at this first, now-legendary protest that American student Matthew (Pitt) meets French twins Isabelle (Green) and Theo (Garrel). Isabelle looks like she has chained herself to a gate, but she’s only play-acting at protest – she holds the chains behind her back, rather than the chains holding her – and I couldn’t make up a more apt metaphor for the spiritual weightlessness of these three. They quickly bond over their shared obsession with cinema, and when Isabelle and Theo’s bohemian parents leave town for several weeks, Matthew moves in. With the Cinémathèque now closed, the three feed their movie love by re-enacting scenes from A Band Apart, Breathless, and Queen Christina (real footage from the films is interwoven with the re-enactments). They also play a game in which one has to guess a movie based on a minimal number of hints; failure to answer correctly results in a sexual dare. The first loser is the surly Theo, who is forced to masturbate in front of his sister, Matthew, and a pin-up of Dietrich. The second loser is Matthew, who is forced – on Theo’s dare – to have sex with Isabelle on the kitchen floor while Theo makes an omelet a few feet away. The explicit sexuality here has earned internationally renowned director Bernardo Bertolucci’s film the same kind of ink his Last Tango in Paris did 30 years ago (Tango’s X rating has been supplanted by the arthouse-friendly NC-17), but the sexuality here is never twittering or fetishistic. The central dilemma is Isabelle’s internal tug between mind and body – Theo getting the mind, Matthew the body, and nobody getting entirely what he or she wants. It’s a combustible mix, and they know it. Early on, Isabelle hints that she knows it can only end badly, a concession that functions as the spoken equivalent of Chekhov’s famous maxim that a gun introduced in the first act has to go off in the third. The Dreamers is based on Gilbert Adair’s novel of the same name, which was based on Melville’s Fifties film Les Enfants Terribles (which was itself based on the novel by Jean Cocteau). As the erotic play between Theo, Matthew, and Isabelle escalates, The Dreamers captures the claustrophobia of Les Enfants Terribles, but not its tragic heft. The elements are all there, but Bertolucci’s somewhat warring interests in sex and cinema cancel each other out. The first, sex, is about real, firsthand experience; the second, cinema, is a facsimile. The Dreamers recalls moments and moods from so many other films – incorporating footage, landmarks, and music – that Bertolucci’s film never establishes an identity of its own. It becomes a pastiche – a loving, giddy-making pastiche, yes – of other movies, including his own; the themes of incest, intensifying erotic games, and virginity lost are recurring themes for Bertolucci. The Dreamers is infused with the same kind of wistful melancholy that made the French New Wave films so winning, and it’s all gorgeous to look at, of course, with a number of heart-stopping shots – a lock of hair catches fire, a lunging kiss smeared with blood, a long walk down a hallway pulsating to Jimi Hendrix. That long walk thrums with anxious possibility – possibility that is realized only in brief, breathless jags. It’s the proverbial gun, unmasked in the first act, that never goes off in the third. 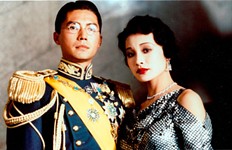 The Last Emperor
This historical drama is inspired by the life story of Pu Yi, the last emperor of China, whose rule was governed by the vagaries of ...