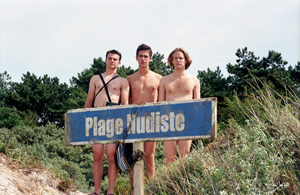 Does Jam/Style Council frontman Paul Weller know that his classic ode to British mod malaise "In the City" is being used as a musical cue in a giddy American teen sex romp? And wouldn’t a tune by Oasis’ Gallagher brothers have been more appropriate? ("Fuckin’ in the Bushes" would’ve been aces, had not Guy Ritchie already nailed it to the climactic fight scene in Snatch.) Eurotrip, from the producing team who brought us 2000’s Road Trip, or as I like to call it Tom Green’s 14th Minute and 59th Second, mines much of the same material as its predecessor, with one major difference: Whereas the Todd Phillips-directed prequel (of sorts) was lewd, crude, and occasionally as comically nasty as discovering a stray pubic hair in your grandmother’s mouth – yeah, that nasty – Eurotrip is helmed by fledgling director Schaffer, who opts for a little sweetness and light instead of the usual fart jokes and rutting. The result is a mixed bag, but it’s bound to offend far fewer people than the original, unless, of course, the sight of bared bosoms, of which there are many, is not to your liking. Scott Thomas (Mechlowicz) and wacky pal Cooper Harris (Pitts) embark on a trip to Berlin to seek out Scott’s sexy Internet pen pal Mieke (Boehrs). Rerouted to London, Paris, Amsterdam, Rome, and Bratislava before they finally track down their obscure object of desire, they swell their ranks by two with the addition of high school twins Jenny and Jamie (Trachtenberg, Wester) who happen to be in Europe as well. Less a narrative film than a collection of easily identifiable riffs on the various European cities in which the quartet find themselves, the good-natured jokiness of the proceedings wears considerably less thin than Phillips’ gutterball snipes did in Road Trip. Former Sheffield/Leeds United footballer Vinnie Jones (Lock, Stock & Two Smoking Barrels) shows up as a Manchester United soccer hooligan; the pope comes in for some ribbing; and easy targets like Amsterdam’s sex trade, horny Italians, and French mimes come in for predictable, if well-done, gags throughout. It’s hardly the most original teen comedy we’ve seen, but, again, Schaffer, working from a script by himself, Alec Berg, and David Mandel, keeps things borderline sweet throughout. A kinder, gentler teen sex comedy? Perhaps Paul Weller won’t be so chagrined after all. 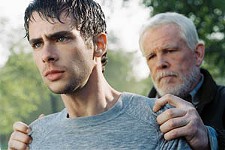 Peaceful Warrior
It's mostly hoo-hah, but there are moments in this New Agey, feel-semi-good crowd-pleaser that rise above and beyond the gymnastics and psychobabble.