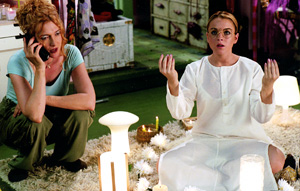 Confessions of a Teenage Drama Queen

Roy E. Disney, very publicly airing his dissatisfaction with CEO Michael Eisner, has said he wants a new face for Disney. As of late, that face has looked an awful lot like Lindsay Lohan, another hugely popular teen hyphenate. (She acts! She sings! She swivels her hips in elaborately choreographed maneuvers!) Lohan’s résumé includes remakes of Freaky Friday and The Parent Trap; although Confessions of a Teenage Drama Queen doesn’t pillage from previous Disney live-action gems, it does bear the same (increasingly tarnished) Disney imprimatur. In this adaptation of Gail Parent’s teen novel, Lohan plays Mary Cep, a New York-born dreamer who fears her acting ambitions are dead in the water when her divorced mom (Headly) moves the family out to the Jersey suburbs. Mary survives in the ’burbs by taking the name Lola, inventing an exotic backstory, and befriending another dreamer, the mousy, inhibited Ella (Pill). Still, it’s a rough transition for Lola, largely due to her newly minted nemesis Carla Santini (Fox), the most popular girl in school and Lola’s chief rival for the lead in the school musical. Lola has all sorts of trials to overcome on the path to high school drama department dominance, and these trials have a sweetly madcap feel to them (aided by composer Mark Mothersbaugh, who has scored all of Wes Anderson’s films). One can almost imagine the character of Lola as written in the script, or perhaps in Gail Parent’s source novel: an underdog taking down the world, her weapon of choice one-part kookiness, one-part pluck. Unfortunately, that underdog doesn’t look anything like Lindsay Lohan. And how could she? There are tacit laws us civilized folk agree to, and one of them is that underdogs do not have professionally done highlights. Lohan is sweet and terribly enthusiastic about the part, but the part is simply a part, and the part is swallowed whole by the persona. Confessions of a Teenage Drama Queen is another casualty of the uncomfortable branding so common to the teen genre, the same branding one sees in a film starring Hilary Duff, or Amanda Bynes, or the next sweet but bland blond actress that comes down the assembly line. Lohan has a warm, gravelly voice and admirably expressive facial expressions, and I’m mildly curious to see what she can achieve once she’s aged out of the sanitized-for-their-protection teen-movie ghetto. Until then, I’m staying away. I prefer to see one shilling for her latest pop single on TRL – where that kind of nakedly consumerist behavior belongs – and not at the movie theatre. 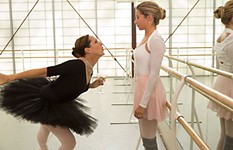 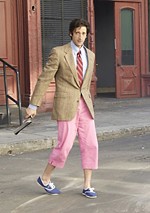