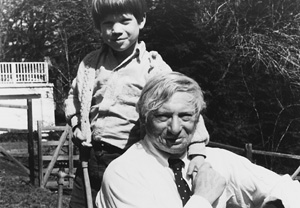 My Architect: A Son's Journey

Compelling, luminous, and poignant, this documentary about legendary American architect Louis Kahn is surprisingly revelatory, not only about the work of its subject, but also because it has been made by one of the great man’s offspring. Filmmaker Nathaniel Kahn was only 11 years old when his father died bankrupt and alone in the men’s washroom in Penn Station. Because the elder Kahn had just returned from India and, for some unknown reason, had scratched out certain information on his passport, his body lay unclaimed in a New York City morgue for the better part of three days. Similar curious doings peppered Kahn’s peculiar life, and so the younger Kahn, who readily admits to having barely known the man (he was born illegitimate, his mother having been one of Kahn senior’s mistresses), began work on My Architect as a means to learn as much as possible about his mysterious father. Unsurprisingly, the film works, not only as a son’s quest to know his father, but also as a remarkable look into the soul of a man who was the once and future king of American architects. Among the buildings created by his father that are visited in the film (and shot with loving precision by cinematographer Robert Richman of Paradise Lost and its sequel) are the Salk Institute in La Jolla and the Kimbell Art Museum in Fort Worth. As Nathaniel Kahn visits these and the other stationary objects of his father’s life, he begins to come to grips with who his father was and why he is so beloved by his peers. Besides Nathaniel’s mother, Kahn was also involved with two other families, all of whom lived within a few miles of each other, each unaware of the others’ existence. For all his mental and imaginative acuity, Louis Kahn never got a handle on the whole paterfamilias thing, choosing instead to shuttle among families and the remote outposts of the world where he could pursue his true dream of architecture. Nathaniel’s interviews with his father’s contemporaries are notable for the love they show. Remarking on the small number of the elder Kahn’s actual architectural constructions, no less than the ever-inscrutable I.M. Pei tells Nathaniel, "Better four or five works of art than 40 or 50 buildings. Quality, not quantity." And Khan’s structures are, indeed, things of towering solidity, works of genuine art that never fail to elicit emotions and command the attention of all who see them. Due to his fame, there exists a good amount of actual footage of Louis Kahn, and we glimpse him wandering around his buildings, talking, mingling, his face scarred by a childhood injury, thick glasses framing the burns like some sort of fleshy artwork. The organic nature of the man belies the permanence of his creations, and watching a time-lapse sunset melt down over his joyously nouveau Salk Institute overlooking the Pacific Ocean is a breathtaking experience (and it’s surely even more so when visited for real). Fathers and families and the impossibility of ever fully understanding either are at the heart of My Architect, and like Nathaniel Kahn, we come away from the film with a renewed appreciation of both.