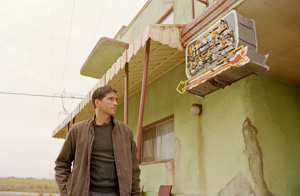 It’s been almost 20 years since director Robert Harmon and screenwriter Eric Red burst on the scene with The Hitcher, a strange, mythopoetic film that featured Rutger Hauer as a diabolic hitchhiker and C. Thomas Howell (remember him?) as his deer-in-the-headlights prey. The intervening years have not been professionally kind to Harmon and Red, nor for that matter Hauer and Howell, but their film has quietly achieved cult status. Short on dialogue but eerily taut and terrifically exciting, it used the deserted highways of the American Southwest as an allegorical badlands for the soul of the modern driver; its images of the young Jim Halsey being pursued by the happy-as-a-clam madman John Ryder are every bit as unsettling today as they were back then. Harmon’s new film, Highwaymen, is something of a sequel to The Hitcher, playing on similar themes of two-lane terrorism and high-octane horror (and both films are direct antecedents of Steven Spielberg’s fine 1971 television movie Duel, itself based on a Richard Matheson short story). But whereas The Hitcher succeeded by dint of unnerving passages of hushed nonaction suddenly exploding into petroleum-fueled bloodshed (usually whenever Hauer popped up), this new film is somewhat more mainstream, with Jim Caviezel (soon to be seen as Jesus in Mel Gibson’s The Passion of the Christ) pursuing a wheelchair-bound serial killer who uses his ’72 El Dorado to slaughter young women on the nation’s highways. Caviezel’s character, Rennie, has a sweet ride of his own – a ’68 Plymouth Barracuda, with a Hemi, no less – that he uses to joust his antagonist off the white lines when he’s not brooding and looking like he could use a Motel 6 shower 'n' soap combo. When Rhona Mitra’s Molly is left as the only survivor of one of the madman’s tunnel-bound killing sprees, she and Rennie team up to, you know, race with the devil (sadly, the great Warren Oates isn’t with us anymore – he’d have been perfect for the Caviezel role). There’s also a crusty traffic inspector on the case (Faison), but for the most part Harmon’s film is a battle of automotive wits between Caviezel and Colm Feore, who inhabits the El Dorado like some literally twisted refugee from David Cronenberg’s exultantly erotic Crash. Caviezel’s Rennie is an appropriately blank cipher, emerging into the light of humanity only when he relates the circumstances surrounding the death of his wife to Molly, but Feore’s character, the oddly named Fargo, is even more of a mystery. "He looks exactly like what he is: a middle-aged insurance salesman, mostly automotive," Rennie tells her. Well, that and 50-odd pounds of medical braces and hardware. Harmon has studied George Miller’s macadam phantoms as well; the opening shot of Highwaymen echoes Mad Max 2: The Road Warrior’s flagrantly speed-mad thrills, and Rennie’s Barracuda rumbles with the basso profundo burblings of Detroit’s finest hour. Still and all, Highwaymen is an also-ran. It lacks the sprawling, Westernized mythos of The Hitcher and feels, in the end, like a previously owned nightmare sorely in need of a new universal hell joint. 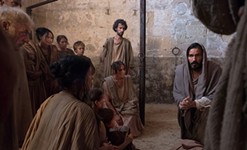 Paul, Apostle of Christ
Biopic of the Apostle.