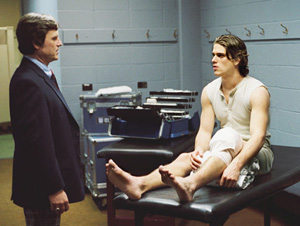 To say that Miracle is Disney’s dramatization of the 1980 U.S. Olympic ice hockey team’s surprising victory over the seemingly unstoppable Soviets is to tell you everything you need to know. But the movie is worthy of a little elaboration. It’s a solid PG (though I was less than enchanted, as the mother of a son, by a player calling a teammate a "pansy"), and the filmmakers make an honest go at genuine all-ages appeal – a welcome rarity in our day and age of niche-marketed "nag or drag" family fare. The sports action is cleanly staged and filmed – there’s even a bit of POV camerawork on the ice – and fans of the game won’t be disappointed by the attention to detail. The uninitiated, however, may glaze over a bit, especially in the ultimate game’s lengthy third period of defensive play, and the film’s two-hour running time is probably too demanding for young viewers. (Most of the kids in my audience were sacked out when the lights came up.) Older kids and their parents will likely appreciate the movie’s multigenerational draw. Scribe Eric Guggenheim gives a précis of the story’s sociopolitical context, so savvy parents can chat the brood up about Watergate, the Cold War, and Three Mile Island. (Jimmy Carter’s "crisis of confidence" speech seems curiously topical in 2004, and in an ironic moment, the film’s mostly Canadian stadium extras unfurl a banner that reads "Soviets get the puck out of Afghanistan!") There’s a certain inevitable nationalism afoot, but the movie isn’t aggressive about it. As curmudgeonly coach Herb Brooks, Russell is firmly apolitical: It’s just about the game. With a boufy hairpiece and pinched upper-Midwestern patois, Russell eerily resembles the late Charles Bronson, but he’s fine in the role. The challenge for the filmmakers – and for the audience – is in differentiating between the team’s 20 players. Guggenheim focuses on the standouts, such as goal-scorer Mike Cruzione (Demsey) and indefatigable goalie Jim Craig (Cahill, Jennifer Aniston’s boy toy from Friends), but the rest of the "boys" blend into a bouillabaisse of dark hair and cute snub noses. The Mouse stacks the cast with toothsome young dudes, presumably to keep tween girls’ attention – pity poor Kenneth Mitchell, the only castmate to get saddled with a droopy Doobie Brothers mustache and shaggy hairdo – but not at the expense of authenticity. Some of the cast members really do play hockey, and teammate Buzz Schneider is portrayed by his son, Billy. In other words, Miracle is a suitably rigorous sports movie. On the other hand, at no time does it break out of the "sports movie" mold. You got your bombastic Mark Isham score, you got your 11th-hour injury, you got your naysaying stiffs in business suits, you got your training montages, and Clarkson is on hand to look smart in her vintage double knits and urge Russell to put his stock footage away and come to bed. (Ah, the travails of the sports-movie wife!) But like a certain underdog team, the movie tries hard and is easy enough to like despite its deficiencies. 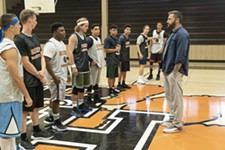 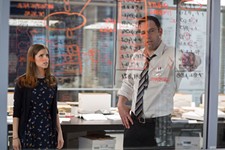 The Accountant
Math, mayhem, and murder abound in this somewhat confusing thriller