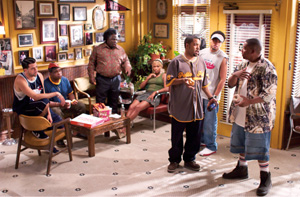 Barbershop 2: Back in Business

The original cast is back for more in this sequel that takes place in the familiar neighborhood barbershop. As the title states, the franchise is "back in business," but business may not be as good for this sequel as it was for the first film. B2 is funny and expands our background knowledge of these likable characters, but the story gets bogged down in some pace-stopping scenes about community gentrification, some mildly confusing temporal transitions, and some exchanges that should be side-splittingly funny but are only mildly amusing. For example, the high expectations for the throw-down scene between Cedric the Entertainer’s Eddie and Queen Latifah’s Gina (who runs the beauty parlor next door, which will be the location of the franchise’s next offering, Beauty Shop, later this year) were dashed by their series of less-than-hilarious barbs. Ice Cube is still cute and cuddly as Calvin, the store owner who inherited the barbershop, adopting the responsibilities of a family man and small business owner. Jesse Jackson probably won’t have as much ammunition against this one as he did when he denounced some of the jokes in the original Barbershop: For the most part this time, Cedric’s riffs mostly stay away from beloved icons like Rosa Parks, and instead take aim at biracial performers and the D.C. snipers (the Jackie Robinsons of serial killers, who broke into the white leagues). Things get stirred up when a new Nappy Cutz, an upscale hair salon, moves in across the street and something called the Quality Land Development Project has renovation plans for the whole neighborhood. Calvin has to decide which side he’s on, and gets involved in the political process. B2 also employs lots of flashbacks that tell the story of how Eddie came to work at the barbershop, although some of the re-creations fail to jell, and the time frames are not always clear. Despite the problems, the old gang keeps things moving along, and B2 is a pleasant, though occasionally bumpy, visit to the old stomping grounds. 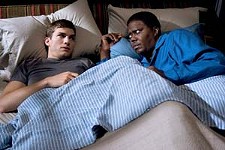 Guess Who
Bernie Mac gets punk'd by Ashton Kutcher.