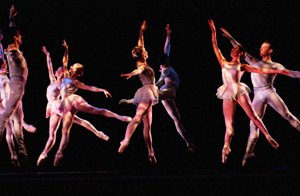 "It’s not the steps, babies," barks the ascot-wearing artistic director (McDowell) of a big-city ballet company. "It’s what’s inside that counts." He’s got a point. What’s inside does count, for a lot, and while I have no doubt that what was inside the drive to make The Company was well-intentioned, what comes across onscreen is a muddle, even at times a bore. Badly straddling two genres (a narrative film and a performance piece), The Company is the result of a years-long effort from actress Neve Campbell (Party of Five), a former dancer who dreamed of someday making a film about ballet. She got her wish, although this collaboration with Robert Altman is perhaps the most placid and impersonal labor of love I’ve ever seen put to screen. The film loosely – very loosely – follows a year in the life of a ballet company (performed here by Chicago’s Joffrey Ballet). Campbell is the only recognizable face in the troupe (she also does all her own dancing), but to call her the emotional center of the film would be a stretch. The audience relates to her because of her familiarity and because of the actress’ inherent likability, not because of any compelling narrative arc. That’s because there is no narrative arc, not for Campbell’s character (named Ry, not that it matters), nor for anyone else in the troupe. Altman’s film is an omnibus of staged performances, with the occasional, entirely fillerlike "dramatic" interlude in between. There are snatches from troupe members’ lives – Ry gets a boyfriend; a corps dancer, crashing on the floor of a fellow dancer’s apartment, earns a stay of berth for producing a much-needed condom – but these asides are a terrific tease: Like a dog with a bone in his line of sight but just out of reach, I almost drooled at these moments that hinted at dramatic tension. But a hint is all the film can muster, swiftly darting back to more shots of anonymous bodies and their banal, teethless interactions with one another. The world of ballet is so peculiar, and the kind of damage dancers inflict on their bodies so perverse, that it boggles the mind that both the script (by veteran screenwriter Barbara Turner) and direction could be so willfully unilluminating. You have to admire a film that almost aggressively eschews narrative conventions … but you don’t have to like it, and I didn’t like one bit this identity confusion (to be or not to be a fiction film). On the flip side, the many dance sequences are breathtakingly performed and breathtakingly filmed, with a heart-stopping outdoors pas de deux that soldiers on through a rainstorm. When The Company owns up to what it is – a performance piece – it’s glorious. Everything else – the window-dressing of a fiction film – just gums up that gloriousness. 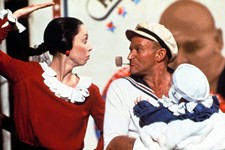 Popeye
Critically drubbed at the time of its release, Altman's Popeye is faithful to the spirit of the old comic strip and animated cartoons. Robin Williams ...