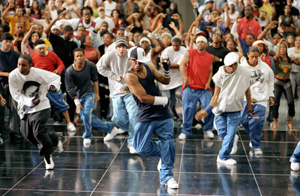 Waiter, there’s a Boogaloo Shrimp in my scampi. Anyone who’s ever been to one of Austin’s occasional and varied B-boy battles, say Hip Hop Humpday or Nasty’s Monday night mixups (admittedly it’s been a while for this reviewer), already knows the inherent drama in the form. Two crews of dancers battle for, usually, a cash prize or plain old glory, using their street moves and acrobatic contortions in lieu of fisticuffs, and after many flexible exertions, one group walks away grinning while their rivals tend to slink off toward the sides, or the bar. It’s Sharks vs. Jets updated for the new school, and You Got Served mines the wild style for all it’s worth. Director Chris Stokes has made videos for hip-hop outfits B2K and IMX, and two of those groups’ members star as dance-mad Los Angelenos – David (B2K’s Omarion) and Elgin (IMX’s Houston) – who take on a moneyed Orange County crew whose leader looks like he just stepped out of Dragonball Z. Eager to escape their jobs as backpack-toting drug couriers for the neighborhood kingpin, the pair serves the OC boys their shuffling papers, and from there goes on to nail the $50,000 prize and a chance to strut their stuff in the next Lil’ Kim video, courtesy of MTV’s largesse. It doesn’t necessarily work out that way, however, as David falls for Elgin’s younger sister Liyah (Freeman), setting off her brother’s sibling-protectorate alarms and capsizing the duo’s longstanding friendship. If, like me, you’ve longed to hear Steve Harvey misquote Nietzsche, this is the film for you, and while it’s about as original as an old Mickey Rooney-Judy Garland hoofer number, it’s nearly saved by the crispy, exultant dance routines that pepper the film. Coming close on the heels of last month’s Jessica Alba hip-hop dance vehicle, Honey, You Got Served is just as clichéd as its predecessor, and lacks the old-school charm of films like Wild Style and Breakin’. Omarion and Houston manage a passable on-screen friendship, with the general tone being a nervous kind of unforced energy. There’s little that’s remarkable about the film, apart from the jaw-dropping choreography from Shane Sparks and Wade J. Robson (the latter has choreographed Britney Spears in the past), which references everything from The Matrix to shadow dancing, and a slick, booming soundtrack featuring Aceyalone, Black Sheep, and Riddlore, but B-boys (and girls) will almost surely have a ball. 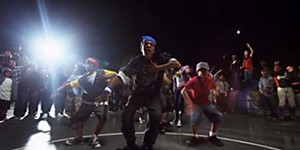 Battlefield America
It's You Got Served for a younger dance generation. 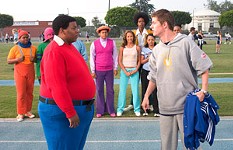