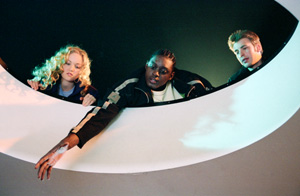 It’s something of a shock to watch as Scarlett Johansson flexes her acting muscles in the midst of an ensemble teen comedy. Coming as this does on the heels of her two enormously confident and mature performances in Lost in Translation and Girl With a Pearl Earring, her role here as poor-little-rich-punkette Francesca (sporting borderline sexy outfits that would likely make Translation’s Charlotte cringe and majoring in what appears to be sassiology) feels oddly out of character. Isn’t this the woman-girl who stole Bill Murray’s heart? And what’s she doing mooning over a high school also-ran like Bryan Greenberg’s Matty? With a full slate of adult roles already crowding her résumé, it’s easy to forget that Johansson just turned 19 two months back and is, believe it or not, still a teenager, and eminently able to play one onscreen. In fact, Johansson is the best thing about The Perfect Score: She’s clearly having a ball with the dramatic pressure off, or at least scaled back a bit, as she stalks and pouts in Hot Topic’s finest tatters. SAT scores and the inherent unfairness of standardized testing are at the heart of The Perfect Score (although the title sounds an awful lot like something Elmore Leonard kicked up, and what I wouldn’t give to see his take on the testing process), as a sextet of high school seniors – an "unlikely" sextet, but you already knew that, right? – band together to secure their university futures by stealing the answers beforehand. The group leader is Kyle (Evans), who along with Matty ropes in Francesca (Johansson), whose father owns the building where the test answers are hidden, and thereby has access, and three additional students: Portland Trail Blazers star Darius Miles as Desmond, Traffic’s Christensen as brainy photographer Anna, and Asian-American stoner rat Roy (Nam), an anti-cliché if ever there was one. Together they embark on an ethically dubious but no less challenging scheme to sneak into the testing facility and make off with those precious little bubble-pocked pamphlets. The premise is good, or at least passable, but The Perfect Score is so lightweight in its depiction of the heist and its various players that it threatens to evaporate before your very eyes. Only Johansson and Nam offer anything of solidity here; Nam, in particular, has the amorous stoner thing down pat. His line readings are a combination of the absurd and the clever, and they’re the funniest – and most touching – thing in the film. Squinting his eyes and pursing his lips for another ribald remark, he’s a high school Lothario overdosing on misguided self-confidence before your very eyes, and a wildly entertaining one at that. The script, by Mark Schwahn, Jon Zack, and Marc Hyman, touches on real-world concerns about the SATs – they’re biased in favor of white males, they’re too rigid – but at its core the film is as standardized as the exam it seeks to debunk, and nearly as tedious.