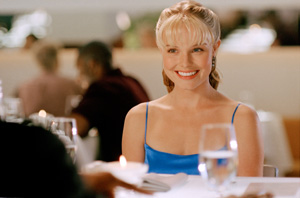 Win a Date With Tad Hamilton!

When paparazzi shots of Hollywood movie star Tad Hamilton’s (Duhamel) drunken night of debauchery hit tabloid stands, Tad’s agent and manager (Lane and Hayes) must scramble to put some gloss back on his tarnished image. They come up with a contest: Win a Date With Tad Hamilton!, all proceeds benefiting some do-gooder charity. Small-town West Virginia girl Rosalee Futch (Bosworth) wins the date, much to the dismay of her best friend, the secretly long-smitten Pete (Grace). Pete’s nervous airport farewell to Rosalee is a warning for her to "guard her carnal treasure!" – which Rosalee does, but with unintended results: So moved is Tad by Rosalee’s earnest and demure demeanor, he flies out to West Virginia in the hopes that some of that small-town goodness will rub off on him. That’s about all there is to this slight romantic comedy: the inevitable love triangle, a weepy decision to be made, the neatly sorted-out last-reel embrace. The bland script and direction are spruced up by a likable cast; the sunny, smiling Bosworth (Blue Crush) does what she can with an underwritten role, and Grace injects sympathy into a drippy part. All the stock tropes of the genre are trotted out – a wisecracking best gal pal (Goodwin, whose tartness deserves better than confections like this and the recent Mona Lisa Smile), a swami-like bartender, third-act epiphanies, and a cookie-cutter circularity. Win a Date With Tad Hamilton! is no better and no worse than 50 other pictures of its ilk, easy enough to watch, even easier to forget. Slightly harder, however, is the attempt to nail down a star rating – how exactly does one evaluate gradations of crap? And should one, when evaluating said gradations, take into account the long-term psychological damage this kind of film – a throwaway romantic comedy rooted in emotional dishonesty – can have on the viewership? Blame shouldn’t go solely to this trifling film alone, of course, but how ’bout this film coupled with every other throwaway romantic comedy rooted in emotional dishonesty? It’s tricky, I tell you, so why don’t we follow the lead of Win a Date With Tad Hamilton! and choose the safe, the middle-of-the-road, the terribly inoffensive TWO STARS. 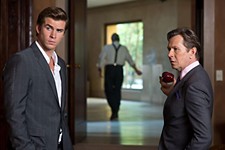