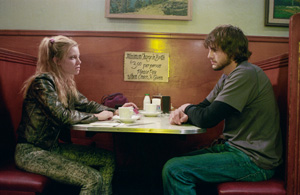 Taking the meteorological/chaos-theory tenet that the flapping of a butterfly’s wings in one part of the globe will incite vast, unforeseeable consequences in another part to its sci-fi extreme is a ripping good premise for a classic time-travel film. Unfortunately, that film is likely to be A Sound of Thunder, Peter Hyams’ adaptation of Ray Bradbury’s 1953 short story, which is scheduled to be released later this year. Hyams’ film has Ben Kingsley going for it, and dinosaurs, too, while The Butterfly Effect has to make do with Ashton Kutcher and the winning triple threat of kiddie porn, prison rape, and impending lunacy. As an 8-year-old boy, Evan Treborn suffers from fugue states during which he does things he can’t recall, be it painting a hideous picture in his kindergarten class or wandering around the house with an evil-looking carving knife, either one of which is guaranteed to scare the hell out of his single mom, Andrea (Walters). Evan’s father is an inmate at the local asylum, ostensibly after experiencing blackouts similar to his son’s, and, after a lengthy first act in which Evan forms a lifelong bond with three neighborhood kids – future sociopath Tommy; pudgy, withdrawn Lenny; and future love interest Kayleigh – the film jumps forward to Evan’s college days. The blackouts have returned with a vengeance, and Evan, much to his surprise, discovers that he can use them, with the aid of a clutch of childhood journals, to return to the past and, with luck, redesign his (and others’) muddled present. But there is no luck to be found in The Butterfly Effect, and so Evan’s noble attempts to save lives and win out over destiny instead result in the sort of unpredictable hellishness that had doughnuts raining from the sky on The Simpsons’ "Treehouse of Horror" time-travel episode. As James Earl Jones said, via baby Maggie, "This is indeed a disturbing development." Director/screenwriters Bress and Gruber, who previously penned the subversively witty Final Destination 2, became the subject of a monster bidding war when Butterfly first made the spec script rounds, and it’s easy to understand why. The film is loaded with enough metaphysical quandaries to boggle Kant, and the story’s fluid movement through both time and the infinite consequences of personal actions (none of them very appealing, by the way) is handled in an engagingly intelligent way. Bress and Gruber’s script is, if anything, one of the more ambitious sci-fi projects of late, and although the film at times feels too dark for its own good – Eric Stoltz as a child pornographer! Exploding babies! Obese, horny goths! – The Butterfly Effect could very well have been a minor classic. The only thing holding it back is its star, Kutcher, until now known for his comic work on That ’70s Show and Dude, Where’s My Car? Here he’s called upon to run a gamut of emotions that would give James Dean pause, from heart-rending sorrow to depression to idealized love to wheelchair-bound pathos, and the resulting strain shows on his face as though he were trying to pass an Oscar statuette. It’s hard to fault him for biting off more drama than he can safely swallow, but the lessons of Keanu Reeves and his multiverse of badly accented acting (Bram Stoker’s Dracula, The Devil’s Advocate) are, apparently, hard won in young Hollywood. By the end of the packed screening I attended, the audience was audibly giggling at Kutcher, and the film suffers mightily from his troubles, despite excellent turns from Amy Smart and no fewer than six fine child actors. My advice? Grab Mr. Peabody’s Wayback Machine and recast with Jimmy Dean. 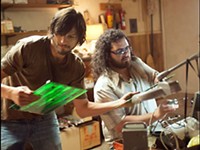