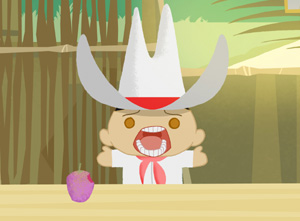 The self-appointed kings of gross-out animation are back with the 2004 edition of their Sick & Twisted cartoon showcase. With only a few repeats from past shows, this new crop of ’toons hits all the usual sex, violence, and body-humor notes. Familiar cartoons, such as Shane Acker’s "The Hangnail" and Don Hertzfeldt’s "Billy’s Balloon," remind us of the cruel world we live in – and numerous new works also take up that theme. "Heavy" by Kell McGregor and "The Mousochist" by John Dilworth come to mind, as does the hilarious "Tinky Winky: The Last of the Teletubbies" by Steven Schuch. The latter is a cartoon that is a post-Barney update of the classic "Bambi Meets Godzilla." Peppered throughout the program are more sadistic episodes of the cultish Happy Tree Friends series than you can shake a stick at. Another inspired piece is Josh Bass’ "Ninjews," a claymation ’toon featuring superheroes created by the use of a ninja sword at a bris. Technically, most of the films in this collection use simple line drawings, and it’s interesting to see the different figurative styles on display. An entertaining stop-motion film is "Peepshow" by Debbie Bruce and Natalie Repp, which uses those Easter Peeps bunnies to do what bunnies do best: multiply. Sex is on the mind of many of the animators as in Patrick Mallek’s "My First Boner" and Bruce Simpson’s "Stickgirl," but only longtime animator Bill Plymton’s "Petting in the Dark" really captures that unbridled burst of lewdness that can also be sensed in the early underground comics when they first broke away from the mainstream. (The catchy theme song of "My First Boner," which comes – so to speak – at the end of the program, causes many people to leave the theatre singing the tune.) Only the French-made "How to Cope With Death" by Ignacio Ferreras and the aforementioned "Heavy" attempt any philosophical underpinnings, although they, too, have their share of physical anguish and torture. Before the show starts and during the intermission, Spike and Mike lead the crowd in bawdy audience participation exercises designed to get viewers into receptive moods. Also handed out to patrons are free 3-D glasses – just don’t look too hard for the 3-D film.