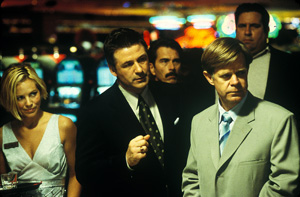 Something of the old Las Vegas is captured in The Cooler: the land of hardcore gamblers, lady luck, and superstition; a one-industry town full of winners and losers, perpetual night, and a clear demarcation between the "lifers" and the "strollers." Alec Baldwin (in one of the best performances of his career since his star-making turn as the conflicted Joshua on Knot’s Landing) plays Shelly, the manager of the Shangri-La casino, one of the last of the old-style houses, which a group of investors wants to upgrade into a showcase of modern entertainment excess. Shelly is trying to resist the corporate takeover, but he also has other fish to fry. His ace in the hole, Bernie Lootz (Macy), is about to depart his employ, and Shelly wants to confound that eventuality. Bernie is the Shangri-La’s "cooler," a walking bundle of bad luck who has the ability to make a person’s luck change just by standing next to him or passing a hand over the cards. Even the name Bernie Lootz echoes the character’s salient characteristic: He’s a loser. Bernie is played to perfection by sad sack Macy. He’s a pragmatic man, who considers Shelly his best friend, even though Shelly is the one who whacked his kneecap over a gambling debt, leaving Bernie with a limp and a marker to fulfill his debt by working for a set amount of time as the Shangri-La’s cooler. Bernie’s time as a cooler is up at the end of the week, but as luck would have it (this is Vegas, after all), a woman comes into his life at the last minute – the cocktail waitress Natalie (Bello). In another of the film’s wonderful performances, Bello plays Natalie as a ragged-around-the-edges cocktail server/wannabe showgirl, whose affection for Bernie is curious but believable. Before you can say Leaving Las Vegas or One From the Heart, The Cooler turns into a story about the transformative power of love. The scenes of this couple’s lovemaking (which, sadly, have been frontally trimmed in order to get an NC-17 rating bumped down to R) have a genuine sunniness about them: Bernie’s grateful surprise and elation (he begins to look like one of the guys in those Viagra commercials about whom everyone tries to guess what’s suddenly different) and Natalie’s joyful discovery of someone who brims with true emotion for her. Co-writer and director Kramer is smart enough to focus the film’s primary attention on these sterling performances, although he throws in a few camera tricks and clever shots for the occasional roll of fixed dice or other surprises. Speaking of surprises, the one at the very end is a real doozy, and it’s in instances such as this that the screenplay sometimes overplays its hand. A subplot about Bernie’s son adds little to the movie’s overall coherence and shading, and the movie’s overemphasis on the controlling power of luck is just a little too pat. Yet, The Cooler is a blast to watch if for nothing more than the performances. They hit the proverbial jackpot. 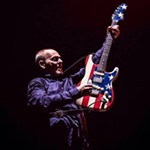 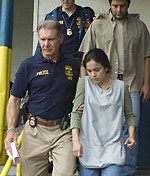 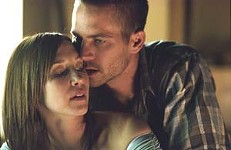